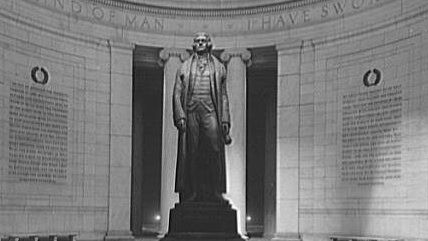 Thomas Jefferson, the Virginia statesman, principal author of the Declaration of Independence, and third president of the United States, was born on this day in 1743. Jefferson was a brilliant theorist and politician who, to say the very least, had an outsized impact on the course of American history. Yet Jefferson was also a deeply flawed individual, a man who could champion the idea that "all men are created equal" while at the same time owning numerous slaves. To mark Jefferson's birthday today, and to reflect on his complicated legacy, here's an excerpt from my take on "The Trouble With Thomas Jefferson," an essay which first appeared in Reason's January 2009 issue:

Does the fact that Thomas Jefferson owned slaves—probably including his own children—negate the wonderful things he wrote about inalienable rights in the Declaration of Independence? To put it another way, why should anyone listen to what Master Jefferson (or other slaveholding Founders) had to say about liberty and equality?

It's important to remember that the idea of inalienable rights didn't start or stop in the year 1776. The historian Gordon S. Wood, in his superb 1991 book The Radicalism of the American Revolution, argues that "to focus, as we are apt to do, on what the Revolution did not accomplish—highlighting and lamenting its failure to abolish slavery and change fundamentally the lot of women—is to miss the great significance of what it did accomplish." In Wood's view, by destroying monarchical rule and replacing it with republicanism, the American revolutionaries "made possible the anti-slavery and women's rights movements of the nineteenth century and in fact all our current egalitarian thinking." They upended "their societies as well as their governments…only they did not know—they could scarcely have imagined—how much of their society they would change."

As evidence, consider two very different figures whose lives intersected with slavery in the 19th century: the abolitionist Frederick Douglass and the pro-slavery politician John C. Calhoun. An escaped slave and self-taught author and orator, Douglass understood better than most just how potent the Declaration's promise of inalienable rights could be. "Would you have me argue that man is entitled to liberty? That he is the rightful owner of his own body?" Douglass would demand of his mostly white audiences. "There is not a man beneath the canopy of heaven that does not know that slavery is wrong for him."

Calhoun, by contrast, believed the Declaration's assertion that "all men are created equal" was "the most dangerous of all political error." As he put it in an 1848 speech, "For a long time it lay dormant; but in the process of time it began to germinate, and produce its poisonous fruits." This false notion of equality, Calhoun continued, "had strong hold on the mind of Mr. Jefferson…which caused him to take an utterly false view of the subordinate relation of the black to the white race in the South; and to hold, in consequence, that the former, though utterly unqualified to possess liberty, were as fully entitled to both liberty and equality as the latter."

Think about what Calhoun is saying here. The idea that "all men are created equal" has slowly developed in the American consciousness, producing the "poisonous fruits" of the anti-slavery movement. Jefferson may or may not have intended such an outcome; he certainly did little actively to bring it about, though he did denounce slavery and its brutalizing impact on white society. But the libertarian ideas that inspired Jefferson, the ones coursing through the Declaration of Independence and later through the Constitution, nonetheless did bring it about. Douglass welcomed that result; Calhoun despised it.