Trump Is Not the Peace Candidate

Don't be fooled by the false prophet of anti-interventionism. 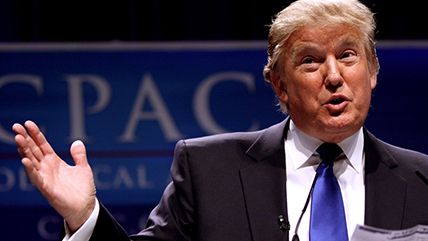 In the ongoing authoritarian outrage that is the 2016 presidential primary season, many self-described libertarians are in an oddly celebratory mood.

"If Trump gets the Republican nomination the neocons are through as a viable political force on the Right," Antiwar.com's Justin Raimondo enthused at the end of February. "And if Trump actually wins the White House, the military-industrial complex is finished, along with the globalists who dominate foreign policy circles in Washington."

Raimondo was far from alone in his desperately wishful thinking about the coming golden age of anti-interventionism. "Only Trump's brash bombast can finally displace the toxic neocon ideology that has mutated the GOP into the handmaiden of the Warfare State," former Reagan budget director David Stockman wrote that same week. Paleoconservative godfather Patrick Buchanan chimed in with a hearty laugh at "the death rattle of an establishment fighting for its life."

It's not hard to see how the paleo crowd wound up here. After Sen. Rand Paul (R–Ky.) exited the 2016 race in early February, Trump pivoted toward a colorfully blunt critique of the dysfunctional defense appropriations process, vowing in New Hampshire to hold the line on Pentagon spending by going after politically corrupt waste and profiteering. At the February 13 debate in the heavily military state of South Carolina, Trump called the Iraq War a "big, fat mistake" that squandered $2 trillion and "destabilized the Middle East," and he said of the Bush administration officials who prosecuted it: "They lied. They said there were weapons of mass destruction. There were none. And they knew there were none."

This direct attack on Jeb Bush and his family's interventionist track record, coupled with the undeniably true but apparently shocking statement that the "World Trade Center came down during your brother's reign," led many conservative commentators to declare, once again, that this time Trump had finally gone too far. When he promptly breezed to a 10-point victory one week later, croaking Bush and cementing himself as the only candidate with a real shot at winning the majority of delegates before the Republican National Convention, the conclusion was clear: Foreign policy, militarism, and even tear-jerking paeans to politicians who govern during crises—in other words, about 90 percent of the content at the 2004 Republican National Convention—were no longer safe political spaces for the GOP. Donald Trump is taking a battering ram to one of the Republican Party's core identities, and not a moment too soon.

By the end of February, at long last, the party establishment that Trump had spent eight months whipping like a cur began fighting back, with a #NeverTrump Twitter campaign, a withering speech from 2012 nominee Mitt Romney, and an open letter from scores of foreign policy specialists warning that "he would use the authority of his office to act in ways that make America less safe, and which would diminish our standing in the world." But that effort came off as both hysterical and hypocritical. Didn't the Iraq and Libya wars that GOP foreign policy elites backed do more material damage than the primary-season rantings of a reality TV star? Wasn't this the same crowd that thought nominating Sarah Palin to be a heartbeat away from the presidency was a swell idea? The jokes almost wrote themselves after the neoconservative commentator Max Boot told The New York Times, "I would sooner vote for Josef Stalin than I would vote for Donald Trump."

So you could see why longtime critics of American empire were talking themselves into enthusiasm about the Trump phenomenon. He was saying things about foreign policy that few Republicans dared previously to utter, and he was making all the right enemies.

Plenty. The same candidate being cheered on by anti-war commentators is an open advocate of committing more war crimes. He favors deliberately targeting the family members of suspected terrorists ("I would be very, very firm with families," he vowed at the December 15 debate in Las Vegas). He wants to expand the use of torture, saying of waterboarding that "if it doesn't work, they deserve it anyway for what they do to us." Trump's troops will not only be "defeating ISIS big league" but also seizing its oil. He keeps repeating a wholly made-up story about General John Pershing dipping bullets in pig's blood and executing villagers in the Philippines a century ago—and he thinks Pershing's alleged behavior is worth emulating. When confronted at the March 3 debate in Detroit with the possibility that military personnel might refuse to follow orders that violate their oaths to the Constitution, Trump said, "They won't refuse. They're not going to refuse me. Believe me." The fact that less than 24 hours later he walked his bluster back slightly provides little in the way of reassurance.

Trump's domestic approach to keeping America safe would require erecting an unprecedented police state. In addition to deporting 11 million illegal immigrants and their 4 million or so legal children, he has proposed a "total and complete shutdown of Muslims entering the United States until our country's representatives can figure out what's going on." In the wake of the San Bernardino terrorist attacks, he suggested "closing that Internet up in some way." As for National Security Agency whistleblower Edward Snowden, a hero to many anti-interventionist libertarians: "I will tell you right from the beginning, I said he was a spy and we should get him back," Trump said in Detroit. (For reason's interview with Snowden, go to page 42.)

Trump's policies, then, are anything but anti-interventionist. He offers a Jacksonian take on American belligerence, in which the already over-stuffed power of the executive branch will be wielded by a famously mercurial and off-the-cuff one-man brand.

And there's an even better reason to resist the lure of Trump's allegedly libertarian-friendly foreign policy. The best case against Trump is, ironically, Trump's case against George W. Bush. Which is to say, you can express the right instincts about foreign policy on the campaign trail, but if you walk into the presidency without much fluency in world affairs, aggressive interventionism is only one tragedy away.

Bush not only promised a more "humble" foreign policy in 2000, he rejected "nation-building" as a project suitable for the U.S. military. Neoconservatives were so distressed at the prospect of him soundly defeating their favorite, John McCain, that by the summer of 2001 many were openly considering bolting the GOP to found a new Bull Moose-style party.

People perhaps unfairly mocked Bush's malapropisms on the campaign trail—calling Slovaks "Slovakians," Greeks "Grecians," etc.—but it was clear that the plain-speaking Texas governor had not exactly spent the 20th century immersed in foreign policy concerns. When the planes hit the World Trade Center on 9/11, he reached for anyone who'd been obsessing about the Middle East. Those people, it turns out, were the interventionists. Soon his foreign policy followed suit.

Trump evinces very little understanding for how the international economy works, let alone the competing interests of nation-states. (To cite one of many examples, he bashes U.S. companies for opening factories in Mexico and China, and then when asked why his own companies make goods there, blames it on those countries for devaluing their currencies.) He makes pre-2000 Bush look like the editor of Foreign Affairs. When the world produces an unpleasant surprise—and it will—this ignorant Jacksonian will, too, reach for the available expertise and advice. The war party will march on.

As is demonstrated by the glaring example sitting at 1600 Pennsylvania, Americans apparently need to keep re-learning that even presidential candidates who vow to roll back the military and surveillance state will likely do no such thing. Libertarians of all people should know better.