Shut Up, They Explained 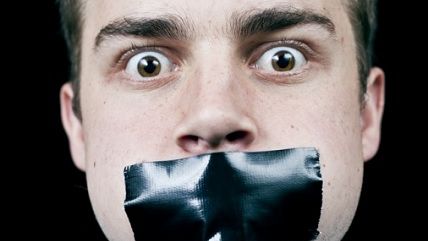 America is more polarized than it has been in six decades, reported Gallup last year, so it is notable when Americans of all stripes can agree on something. Unfortunately, they have agreed that there should be hell to pay if you people don't shut up.

Who constitutes "you people" depends on who is being asked. If Donald Trump is being asked, "you people" is the media. Trump—a ceaseless geyser of insults, put-downs, bigotry and crudity—thinks the media, those "lying, disgusting people," as he puts it, are being mean to him.

But he's going to fix their wagon. In February, Trump promised to "open up" libel laws "so when they write purposely negative and horrible and false articles, we can sue them and win lots of money." At present, the law requires that a statement be both willfully false and defamatory—i.e., injurious to reputation—to be libelous. True statements that injure reputation aren't.

Trump would lower that bar to "purposely negative." By that standard, Bill Clinton should have been entitled to monetary damages from anybody who reported anything about the Monica Lewinsky scandal.

But if Trump does win the White House, he will have some catching up to do. Attorney General Loretta Lynch has referred to the FBI the question as to whether people who question the scientific consensus about climate change should be prosecuted.

Lynch might have been acting on a request from George Mason University professor Jagadish Shukla, who—with 19 others—wrote a letter urging the administration to follow the advice of Rhode Island Sen. Sheldon Whitehouse (D) and go after "corporations and other organizations" by using the Racketeer Influenced and Corrupt Organizations Act. As The Wall Street Journal has noted, RICO is an anti-mafia statute written to help "prosecute individuals tied to loansharking and murder-for-hire."

Speaking of rackets: Shukla is the founder and head of the Institute of Global Environment and Society. His wife is the business manager, and his daughter is the assistant to the president. The organization gets 98 percent of its funding from the government, and the Shuklas have reaped more than $5 million from it over the years. (Is it "purposely negative" to point this out? Better ask Trump.)

The attorneys general of New York and California are not waiting for the feds. Democrats Eric Schneiderman and Kamala Harris are investigating Exxon for allegedly lying to the public about climate change. Lying to the public isn't nice, but should it result in criminal prosecution? A few thousand politicians across the country had better hope it doesn't.

In a similar vein, Massachusetts Sen. Elizabeth Warren (D) has writtten to the Securities and Exchange Commission asking it to investigate several companies for saying things she doesn't like. In her letter, Warren vents her displeasure over the fact that "corporate interests have become accustomed to saying whatever they want about Washington policy debates." (What fiends.)

She is particularly cheesed off because representatives from four companies have publicly complained that a proposed Department of Labor regulation (regarding conflicts of interest in the retirement-advice industry) would be "burdensome" and "intrusive." Yet, she notes, other representatives from those companies have told investors—better sit down for this, it's a shocker—that they would soldier on and continue to grow in spite of it.

Warren concludes that this qualifies as lying to investors, which is illegal, and she wants the SEC to decide if charges are warranted. What she really wants, of course, is to shut down criticism of regulation, and she's willing to use the coercive power of the state to do so. That's nothing new for her, either.

Last fall Warren wrote a letter to the Brookings Institute demanding to know about its policies on conflicts of interest. One of its scholars, Robert Litan, had produced a paper raising questions about the same Labor Department rule at issue in her letter to the SEC. Litan had testified about the rule before Congress, and noted that his research was funded by the Capital Group investment firm. That disclosure didn't go far enough for Warren, and shortly after the story broke in the Washington Post, Litan left Brookings.

If this is how grown-ups act, it's little wonder that college students often display a shocking disregard for the principle of free speech. The Knight Foundation and the Newseum recently sponsored a Gallup survey on university campuses. Among other things, it found that 49 percent of college students think the media should be denied access to a campus protest if the protesters fear the coverage of said protest might be unfair. Think of them as future Trumps in the larval stage.

About three weeks ago, somebody chalked "Trump 2016" all over the place at Emory University. Offended protesters gathered in the quad to chant, "You are not listening to us! Come speak to us, we are in pain!" They met with the campus president—who, to his credit, subsequently chalked "Emory stands for free expression" on the sidewalk.

But that did not stop many at the school from viewing the pro-Trump graffiti as an "attack" intended to convey, in the words of a Facebook post by Latino students, "hate and discrimination… hostility and venom."

Trump likely would view that Facebook post as "purposely negative," therefore libelous. If he and the students both got their way, then you could face sanctions for supporting Trump—and for criticizing him, too. In America, free speech increasingly seems to be something everyone supports—right up until the moment they hear something they don't want to.