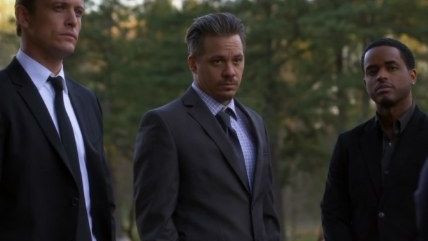 Viewed one way, NBC's new revenge drama Game of Silence is depressing evidence that Hollywood's creative bankruptcy is more profound than we ever imagined. It's an American remake of a Turkish series called Suskanlar, which is itself a remake of Barry Levin's 1996 film Sleepers. It is indeed a sad day for America's storied tradition of intellectual-property ripoffs when we have to subcontract them offshore.

Then again, if you murmur to yourself "property is theft" while clicking your Jimmy Choo knockoffs three times, it becomes possible to see Game of Silence as something else altogether: a wildly entertaining runaway freight train full of lurid secrets and implacable vengeance. Whether it came from the brow of Zeus or 9-year-old Hondurans sweatshop workers, Game of Silence is a killer whale of a show.

Game of Silence is rooted in a secret that five friends, now teetering on the far edge of their 30s, have shared—and tried to forget—for 25 years: a joyride in a stolen car that ended badly, with four of them serving time at a reform-school hellhole where they were beaten, raped, and abused by guards and their inmate flunkies.

But the ugly memories resurface forcefully when one of them has a chance encounter with their worst abuser and, in a raging moment of madness, beats him half to death with a golf club, triggering an escalating series of bloody reprisals on both sides.

The violence threatens not just their varying degrees of middle-age respectability, but their lives; the youthful gang-bangers they tangled with in prison have grown up into full-blown gangsters whose tentacles reach into high and unexpected places. How to fight back soon divides the five friends.

One (David Lyons, Revolution), now an attorney on a fast track to partner at his big-shot Houston firm, wants to use the legal system to expose and jail the criminals.  Another (Michael Raymond-James, True Blood), who operates a junk yard, suggests a less civics-book approach: "I'd set 'em on fire, shoot 'em in the face and go get a bag of tacos."

You don't have to be Robert Frost to guess which path will left untaken. But that's about the only thing that's predictable about Game of Silence, which is layered with secrets within secrets and plots within plots and riddled with festering grudges and atavistic savagery. Deride it as manipulative melodrama if you will, but melodrama succeeds precisely because it is manipulative. Game of Silence grabs your gut from its opening moment and doesn't let go.

The show is not without occasional irritations, particularly some inept editing of the inevitably frequent flashbacks in the early going. But, having displayed its capacity for video flash, it settles into a capable storytelling groove.

That's aided by the performances of the five principles, who also include Larenz Tate (Rush) as the seemingly amiable lady's man of the five friends, Derek Phillips (Friday Night Lights) as the damaged kid who lights the story's fuse with his golf club, and Bre Blair (Last Vegas) as the girl who stayed out of reform school but nurses secrets of her own. They each carve distinctive characters from what in less deft hands might have been an indistinguishable rabble of victimhood. And they don't need to be carrying golf clubs to be scary.