Why Is Everybody So Mad at This 9-Year-Old Reporter? Kids Can Do Stuff, Too

We should encourage all children to be so ambitious. 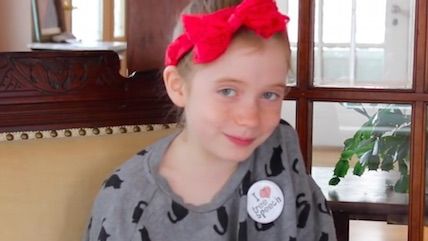 This story is everywhere today. As CBS News reports:

A 9-year-old reporter who wrote about a suspected murder in her small Pennsylvania town is defending herself after some locals lashed out about a young girl covering violent crimes.

Hilde Kate Lysiak got a tip Saturday afternoon about something untoward happening on 9th street in Selinsgrove, about 150 miles northwest of Philadelphia.

She went to the scene to get the details and posted a story and video clip on her website the "Orange Street News" later that day.

"Hi, Hilde Kate Lysiak here reporting from the Orange Street News on the 600 Block where a man suspectedly (sic) murdered his wife with a hammer," she begins the video. "I'm working hard on this ongoing investigation."

Unbelievably, some critics quickly told her to stop being such a grown up, posting comments on her videos that suggest she should let adults cover the news.

"I think she's very talented and her aspirations are great, but it's probably a bigger case than a 9-year-old should handle," said one such commenter. "Adults in the community are having trouble wrapping their heads around what happened. I can't imagine how a 9-year-old can cover a story like that."

Others said she should be playing with dolls, or having tea parties. Some used outright profanity.

Their angry, patronizing words remind me that throughout American history, African-Americans, women, and others not in power were commonly told to stay in their place and not get uppity.

Clearly, some people are still freaked out (read: threatened) when a type of person they have written off as incapable turns out to be outrageously competent and courageous.

Kids are the just latest group we underestimate and protect to the point of denying them the respect and freedom they deserve. Remember, Rhode Island just proposed a law that would forbid a child Hilde's age from staying home alone even for 10 minutes. Another proposed law there would keep her inside at recess if it was ever colder than 32 degrees outside. Are these laws protecting kids, or stifling them?

Hats off to this intrepid reporter, who is on the trail of one murder and may solve another: Who's behind the hit jobs on childhood gumption?