Legislators hurry to act before the alarm bells can be rung. 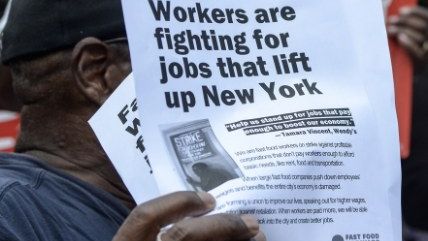 That the state of California would announce a massive, game-changing new labor mandate and pass it in less than a week tells you exactly how much legislators and proponents absolutely do not want a discussion of the consequences. That's precisely what has happened. Both houses of California's legislature approved Thursday a deal to increase the state's minimum wage to $15 an hour over the next six years everywhere in the state. The only concession for small employers is that there will be an extra year for them to comply.

The entire deal was announced and passed in less than a week while economists were still analyzing the potential consequences. Legislative analysts released the report detailing the consequences of the minimum wage increase on the state's budget just a day before the legislature voted on it.

When the deal was announced I warned about the significant potential impacts in areas outside major urban centers, poorer non-urban communities where there aren't wealthier people to absorb the rising costs increases in the minimum wage. FiveThirtyEight economics writer Ben Casselman offered some similar concerns tied to actual statistical analysis of how many jobs it may impact. He helpfully provides a chart that shows what percentage of occupations, based on the community, will be affected by such a drastic minimum wage increase. All those poorer counties that don't house major cities are the places where the greater percentage of occupations will be affected by the minimum wage increase.

It's easy to imagine the people who argue that this is all the more reason for the wage increase—to help those people in poorer parts of the state also get a raise. But such an argument misses the much larger point that the greater the percentage of people who will receive the pay increase means that there is a much smaller percentage of people who are able to absorb the increased costs of doing business and purchasing goods and services that will naturally follow.

(As an aside, in answer to a question asked after my blog post on Monday, California law prohibits the use of collective bargaining to arrange for employees to make less than the state's minimum wage. This is not a situation like what happened in Los Angeles, where unions pushed for a minimum wage increase and then tried to exempt themselves in order to get an advantage over competition.)

And here's a few other issues that really aren't getting much attention (probably deliberately so) as the legislature and governor rush this mandate into law:

About those government costs. Once the minimum wage reaches $15 an hour, legislative analysts say it will cost the state government an additional $3.6 billion a year in changes to just state employee wages. The state budget for 2016-17 proposes $168 billion in spending, to give some context. But that's just state spending. It would likely also impact municipal government costs. Do keep in mind that even if local governments don't employ lots of workers at minimum wages, many collective bargaining agreements tie base pay to whatever the minimum wage actually is. So there could full well be a number of employees both in the public and private sector who make more than $15 an hour now who will nevertheless be able to demand raises anyway because of the increase.

Even more pension obligations. Don't forget that the increase in wages doesn't just obligate taxpayers to fund government employees only when they're actually working. Wage levels determine post-retirement pension payments, so those are going to skyrocket as well. The state of California has billions and billions of unfunded pension liabilities (representing the amount of money taxpayers have to pay when pension funds don't perform as well as promised). And again, that's just for state employees. Municipalities have their own pension crises, and they've contributed to the bankruptcies of cities like Stockton and San Bernardino. The City of San Bernardino recently dismantled its own fire department and contracted with the county in order to try to reduce its obligations.

Impact on salaried employees. In California, it's not just the low-skilled hourly wage slaves that will be affected. California is persnickety about the circumstances through which employers may designate employees as salaried and therefore exempt from many hourly pay and overtime guidelines. One of the rules (and not the only rule by far) is that these employees must make at least twice the minimum wage. Right now that's about $41,000 given California's $10 minimum wage. By the time this increase is in full effect employers will have to pay managers and others on salaries a minimum of $62,400 annually or shift them back to hourly wages.

In Casselman's FiveThirtyEight analysis of California's wage jump, he notes that America is seeing job growth at both the top and bottom of the wage scale (and he has graphs to prove it), but it's the middle getting hollowed out. Because of this salary rule, we can see exactly how that happens in California. This salary rule won't likely affect people in upper management or well-established salaried employees. But it will likely result in an elimination or reduction of these types of positions in the middle of the employment spectrum. Critics of the minimum wage like to talk about how it pulls the rungs out of the bottom of a metaphorical wage "ladder," making it harder for poor and unskilled workers to find opportunities into the workforce. In California (and probably other states as well) these increases will also result in pulling some rungs out of the middle of the ladder as well, reducing opportunities for wage laborers to try to transition into management roles.

On the other side of the country, New York has decided to follow in California's footsteps, though a little more carefully. A "deal" with legislative leaders (and not anybody who actually has to pay for the costs) will raise the minimum wage to $15 an hour in a timeline that shifts depending on location and will be subject to an impact review once it hits $12.50 an hour. The plan also includes 12 paid weeks of paid family leave, an entitlement that Peter Suderman explains here actually has negative impacts on women in the workplace.