Garland looks like a moderate because he tends to side with the government irrespective of who's in charge. 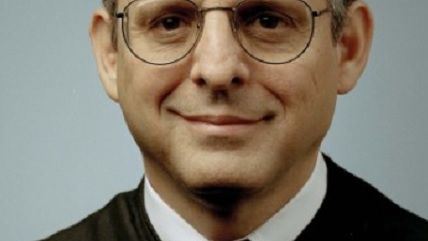 (US Court of Appeals)

The way things look now, Merrick Garland's nomination to the Supreme Court is never going to get a hearing in the Senate. It's probably just as well.

True, Republicans owe Garland—and the country—the courtesy of consideration rather than summary rejection. By all lights, he is a decent human being and a brilliant legal mind. But that does not make him an optimal choice for the high court, despite his reputation as a moderate.

No—make that because of  his reputation as a moderate.

Everybody and his sister has been pinning the word "moderate" on Garland. Some of that is just spin. President Obama's first Supreme Court pick, Sonia Sotomayor, was called a "moderate," too—or, at most, a "moderate liberal." Same story with Elena Kagan. Those two Justices have since become the court's left-wing anchors. It's standard operating procedure for the establishment media to paint Democratic nominees as more centrist, and Republican nominees as less centrist, than they really are.

Garland's reputation as a moderate is more deserved—at least in one sense. He is not a doctrinaire liberal, nor is he a rhetorical bomb-thrower, and he shies away from deciding cases on sweeping grounds when more narrow ones will do. In the past he has enjoyed considerable support from Republicans, including Senate Judiciary Committee veteran Orrin Hatch (Utah), who once proffered Garland as a possible Supreme Court nominee. Richard Painter, a former chief ethics counsel for the George W. Bush White House, recently went so far as to write that Garland, "a proven moderate," is "exactly the type of person who might have been chosen by the Bush administration." Apparently he meant that as a compliment.

Garland's reputation for moderation rests partly on his experience as a former federal prosecutor who, as Painter notes, "has aggressively and thoroughly prosecuted terrorists"—including the Unabomber and Timothy McVeigh. And perhaps because of that background, Garland is exceedingly friendly to law enforcement.

A New York Times analysis examined 14 criminal cases in which Garland voted differently from other judges. In 10 of them, Garland sided with the government—a record that "has contributed to his image as a moderate," the paper notes.

But then, when has Garland not sided with the government?

He supported the government's position in a case arising out of Guantanamo Bay, arguing that federal courts had no habeas corpus jurisdiction over detainees held there. The Supreme Court later ruled 6-3 that they do.

Garland also takes the government's side—reflexively—in cases regarding the authority of executive agencies. This might seem like an obscure area of jurisprudence, and it certainly does not set the streets on fire like cases involving gun control or abortion rights do. But it affects a vast number of Americans nonetheless. Federal agencies issue far more rules than Congress issues laws, and each year 10 times more people are tried in administrative proceedings by federal executive agencies than are tried in federal courts.

Six years ago Tom Goldstein reviewed Garland's record on Scotusblog and found that "Judge Garland has strong views favoring deference to agency decisionmakers. In a dozen close cases in which the (D.C. appellate) court divided, he sided with the agency every time."

Goldstein also noted, with regard to civil rights, that "Garland has in a few cases rejected assertions of constitutional rights, disagreeing with his more-liberal colleagues. I am not aware of counterexamples in which he has staked out a more liberal position."

And speaking of civil liberties, Garland seems ill-disposed toward one that has an entire constitutional amendment all to itself: gun rights. When the D.C. court struck down Washington's ban on handguns, Garland wanted to rehear the case. By itself, that might not amount to much. But Garland also supported a Clinton-era practice of retaining the records from instant gun background checks, in defiance of the 1994 law that created them. Whether that counts as deference to an executive agency or hostility to gun rights, or both, the result is the same.

Indeed, a prominent blog covering intellectual property law reviewed Garland's record and concluded: "Time and again, it would appear that Garland isn't interested in pursuing political ideology so much as he is interested in siding with the views of the government presented in the case."

To be fair, Garland doesn't side with the government 100 percent of the time. As Reason's Jacob Sullum notes, he defers to the government least in freedom-of-information cases. But that's the rare exception—and that's the problem.

Sometimes Garland sides with conservatives, and sometimes he sides with liberals. So on a liberal-vs.-conservative axis, he looks like a moderate. But the ideological wing he joins depends on which wing has taken the government's side. That's where he ends up. So on a government-vs.-liberty axis, he does not sit in the center— but on the extreme edge.