Knocking Smokeless Tobacco Out of the Ballpark

Liberty suffers another blow in Chicago 'for the children.' 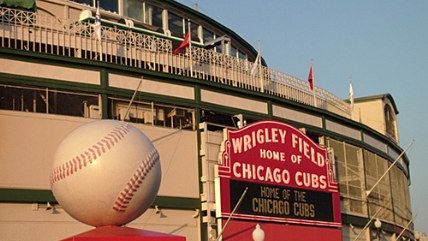 Fans do not attend Major League Baseball games to enhance their physical health. Among their customary activities are eating hot dogs, drinking beer or sugary soda, sitting idly for hours on end and stressing terribly about inconsequential events on the field of play.

But this season, those at Wrigley Field and U.S. Cellular Field will have to forgo one vice. Chicago recently became the fourth city to outlaw smokeless tobacco in sports stadiums (followed shortly by New York).

The law owes much to the Campaign for Tobacco-Free Kids, whose president, Matthew Myers, says, "Our national pastime should be about promoting a healthy and active lifestyle, not a deadly and addictive product."

But don't worry, MillerCoors and Anheuser-Busch. He's not talking about your wares. Alcohol is one deadly and addictive product that will remain legal, welcome and profitable at professional sports venues. Some venues—Miller Park, Busch Stadium, Coors Field—are even named after brewing giants.

Alcohol is not just for fans, either. What do players do in the locker room after winning a title? They spray and drink enough Champagne to float a battleship.

Not everyone is happy about the new law. Cubs pitcher John Lackey, who doesn't use smokeless tobacco, took the position that "grown men should have their own choice." Catcher Miguel Montero lamented, "It's going to be tough to quit cold turkey."

But the most cogent objection came from Cubs manager Joe Maddon, evincing an affinity for libertarian principles. "I'm into personal freedoms," he said. "I'm not into over-legislating the human race." He even offered a modest counterproposal: "Educate the masses and let everybody make their own decision."

Illinois already forbids smoking in stadiums, on the grounds that watching the White Sox attempt to catch and throw the ball—they were the worst defensive team in baseball last season—is miserable enough without having to peer through someone else's cigarette fumes. Not only that but secondhand smoke carries health risks to innocent bystanders, including death from cancer.

But secondhand spit is a danger only to your shoes, not your lungs. The person in front of you could be getting a nicotine fix without your ever being aware of it, much less injured by it. The difference between banning cigarettes and banning snuff is the difference between minding your business and butting into everyone else's.

Using these products is less hazardous than sucking on paper cylinders stuffed with burning leaves, but it's not harmless. According to the Centers for Disease Control and Prevention, smokeless tobacco causes cancer of the mouth, esophagus and pancreas, among other maladies.

The danger gained attention when two baseball legends who chewed tobacco, Tony Gwynn and Curt Schilling, contracted oral cancer (which in Gwynn's case was fatal). But it remains a legal commodity that adults are allowed to consume at their own risk, like booze and bratwurst.

The Campaign for Tobacco-Free Kids justifies its overbearing demand with the pretext that it's for the good of the children. "Players' use of smokeless tobacco sets a terrible example for millions of impressionable youth," it says. A complete ban in baseball is essential "to protect our kids."

Really? It's not as though our heroes are flaunting their addiction. Spectators at the ballpark or at home would have trouble detecting which players are chewing Red Man and which are chewing gum or sunflower seeds.

If a small percentage of high-school boys dip or chew—almost no girls do—it's not because they idolize Miguel Montero. Blaming ballplayers for adolescent use of smokeless tobacco is like blaming Taylor Swift for teenage heartbreak.

Players and owners have already taken steps to shield children. Tobacco in any form is banned in the minor leagues, with fines for players caught with it, even in their lockers.

Major league players are not allowed to use smokeless tobacco when signing autographs, giving interviews or doing events with fans, and they're forbidden to possess it on the field—a change from the days when tins of snuff were a common back-pocket cargo. Strict discretion is the norm.

That should be enough. The existing arrangement in Major League Baseball accommodates the reasonable goal of not encouraging kids to use tobacco and the right of players and coaches (not to mention fans) to exercise their own preferences.

As addictive habits go, chewing tobacco is bad. But over-legislating the human race is worse.