Progressives and conservatives both get families wrong. 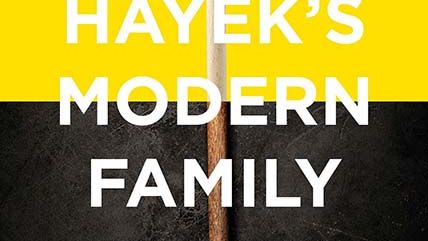 For the economist Friedrich Hayek, there are two sorts of institutions: designed ones, which have a blueprint in place from the moment of creation, and organic ones, which do not. Change in the first sort of institution (sometimes described as "top-down") is typically managed by a designer and happens in big chunks; change in organic ("bottom-up") institutions tends to be unplanned and gradual. The National Football League is top-down: If the rules committee decides it would be a good idea to allow a 2-point conversion after a touchdown, the game changes accordingly. The English language is bottom-up: No planner decreed that "verily" would disappear and "I can't even" would emerge.

The family is the second sort of institution. It arose organically and has evolved over time, but not according to any central plan.

In Hayek's Modern Family, Steven Horwitz of St. Lawrence University tries to understand the family's evolving structures in terms of the functions the institution serves. While Horwitz's primary training is as an economist, his work draws also from history, social philosophy, and constitutional law. His conclusions may confound both progressives and conservatives.

Conservatives, he writes, typically "believe that the family is an institution under attack by the culture and by public policy." As a result, they position themselves as defenders of the "traditional family" and lionize "family values." Yet the institution these conservatives see themselves as defending—"a married, heterosexual family with children where dad is the primary earner and mom the primary caretaker of the household"—isn't as traditional as they suggest. That model, Horwitz shows, was historically contingent, predominant for only about 20 years after World War II, and culturally nonuniversal. Marriage itself, far from having been "always" the union of one man and one woman, has changed in a variety of ways. As the joke goes, my daughter said she wanted to be treated like a princess, so I made her marry someone she doesn't love in order to strengthen our alliance with Prussia.

The joke works because we're so used to thinking of marriage in terms of romantic love between moral equals that we lose sight of the fact that many other "traditional" arrangements have been dominant at different times and places. So too with families in general: For most of human history children were economic investments, either in the sense implied by the joke or in the sense of creating labor power. Wives once were essentially property, traded from the father to the husband.

The phrase "modern family" in Horwitz's title may prompt some people to think of the sitcom of that name, in which an extended family includes such conservative nightmares as a remarried divorcée, a gay couple with an adopted daughter, and a heterosexual couple in which both spouses work outside the home. But "modern family" also refers to structures conservatives generally appreciate, such as a small number of cherished children who are not expected to enter the full-time work force until age 18 or older, and a marriage based on committed companionship.

In short, conservatives aren't defending the traditional family so much as they're romanticizing a very narrow slice of time. In the process they're ignoring Hayek's insight about the evolutionary nature of social institutions. As Horwitz puts it, conservatives are failing "to distinguish between the form families take and their ability to function." It is the function that is key, and this evolves over time as well.

If Horwitz's defense of the family's changing form challenges conservatives, progressives may be taken aback by his discussion of those changing functions. The cultural shifts that progressives generally regard as good—marriage as a voluntary union of autonomous equals, children as persons, the right to exit an abusive relationship—are the result, Horwitz argues, of the market revolution and the explosion of productivity it made possible. Markets and wealth, he writes, "have freed the family from a concern with material survival and have opened the space for it as the site of our deepest nonmaterial aspirations."

In a premodern economic landscape of agricultural communities, the family's primary function is to facilitate productivity. If you have more kids, you can be more productive. This requires a wife (or even, in some places, multiple wives) who can produce children and manage the household. By changing families' functions, industrialization and markets allowed changes in families' forms. If the point of getting married is no longer the economic necessity of producing farmhands, but rather to provide emotional satisfaction and happiness, this opens up the possibility of the spouse being of the same sex.

The very ideas of "childhood" and especially "adolescence" are products of the modern world. As Horwitz notes, our current tendency to think of 19-year-olds as children is new, not "traditional." And the rapid increase in economic abundance in the 20th century is, he demonstrates, a key factor in women's participation in the out-of-home work force.

Further left, some figures, such as Valerie Lehr and Shulamith Firestone, have argued that the family is intrinsically oppressive and ought to be abolished. Horwitz replies that this is not just undesirable but impossible. Among other things, Horwitz argues, the family is indispensable for child-rearing, something that "cannot be replicated by schools, 'the village,' or the state."

"Where conservatives will have to reconcile their supposed love of capitalism to the reality of the dynamic cultural change it produces that they dislike," he concludes, "progressives may have to recognize that the diversity of family forms that they rightly celebrate is significantly due to capitalism and the wealth it has created." Horwitz thus is neither conservative nor progressive, but classically liberal. He sees the family as a vital social institution that evolves over time, with the market economy (among other forces) driving changes in its structure.

The evolution of organic institutions can, of course, be affected by policy makers' top-down interference. Horwitz shows how this historical scholarship informs several significant policy debates, including the liberalization of divorce laws, the scope of parental rights, the legal status of same-sex marriage, and the welfare state's effects on family life. Here too, his conclusions will provoke both left and right.

Take same-sex marriage. This has opponents on the left, who see marriage as an oppressive and heteronormative institution that gays should not want to join, as well as the right, where some people agree that marriage is heteronormative and take this to be a virtue rather than a vice. Horwitz's counter to both is to trace the development of marriage from utilitarian to companionate and to show why society would do better to preserve the institution of marriage while at the same time expanding its scope.

The takeaway lesson Horwitz offers for conservatives is that there is no cause for alarm if same-sex couples get married or if unhappy partners divorce. These changes have followed naturally from other aspects of modernity that conservatives embrace. At the same time, progressives who appreciate recent changes in family form need to be more aware of the political and economic changes that have brought us where we are.

Above all, we should try neither to freeze the family's evolution in place nor to engineer new changes from above. When public policy addresses the family, it should aim to allow the institution to keep evolving with our needs, changing both form and function in ways that help us lead better lives.