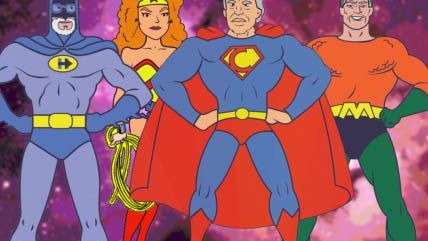 Democrats in Alaska, Hawaii, and Washington state are holding caucuses today. Bernie Sanders supporters are hopeful they can narrow the gap between the Vermont senator and Hillary Clinton, who is only 702 delegates short of the 2,383 needed to secure the nomination. Clinton's numbers are bolstered by the support of 467 superdelegates, electors chosen by party leaders who can vote at the national convention for whichever Democratic candidate they choose. By contrast, only 26 superdelegates have pledged to support Sanders.

Who are these Democrats, imbued with such power? Reason TV put together this instructional cartoon to help sort it all out.

"Super Delegates" was originally released on March 15. Watch above or click the link below for full text, links, downloadable versions, and more.