Students said they feared for their lives. They shouldn't. 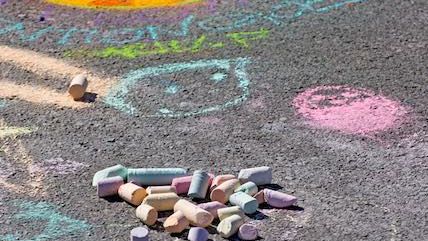 The sudden appearance of dozens of iterations of the same message—"Trump 2016″—all over the sidewalks and buildings of Emory University has caused quite a stir. Many on campus are decrying the chalk scribblings as acts of vandalism. Libertarian writer Jeffrey Tucker, who was at Emory earlier this week, also described the messages as vandalism.

Is that a fair description of what happened? The answer seems to be yes. Emory is a private university: as such, it can set rules on what kinds of political expression are allowed on campus. Emory does have a policy on chalking: it permits it in certain places, on sidewalks, but forbids it on the walls of buildings.

Not all of the "Trump 2016" messages appeared on sidewalks. It seems clear, then, that the perpetrator violated university policies. I would note that chalking buildings is not as serious as graffiti-ing them. Chalk washes off very easily: a sudden rainstorm would cleanse the campus of most of its pro-Trump displays. So while it's undeniably true that the perpetrator broke some rules—rules that Emory has every right to insist upon—it's not clear that he or she caused actual, physical property damage.

In any case, it's reasonable for the administration to attempt to figure who did this, and hold that person accountable—though I personally would not recommend a harsh punishment, since chalk is ephemeral.

But Emory students' chief concern is not that the chalk messages violate university policy. They don't see the chalk as mere vandalism: they consider it an act of violence.

"It was deliberate intimidation," one student, freshman Jonathan Peraza, told The Daily Beast's Lizzie Crocker. "Some of us were expecting shootings. We feared walking alone."

"I think it was an act of violence," said another student, Lolade Oshin. "It was an active threat, intentionally meant to create opposition on campus and to segregate groups on campus that are already segregated."

These are serious, alarmist reactions to obvious political speech. (Indeed, what could be more straightforward than "name of Republican frontrunner" + "indication of support in the upcoming national election?) We don't know why someone wrote the message "Trump 2016" all over campus, and it's of course possible that his aim was to frighten people. But if that was his goal, he should have failed, because the message isn't frightening.

Students seem to suggest that the unique horribleness of Donald Trump's policy positions renders any and all support for him racist by default. But it certainly isn't actual racial aggression to declare one's support so blandly. That students misunderstand this—that they actually think they are in physical danger from chalk—is concerning.

Regular readers know that I frequently make reference to over-sensitive and easily-offended students whose fragilities have ushered in a new wave of censorship and political correctness on college campuses. What is happening at Emory certainly seems like an example of that.

But it's also an example of rampant safety paranoia plaguing American schools—including colleges. There is no evidence—none whatsoever—that the chalk messages were harbingers of violence. There is no reason to believe shootings would ensue. College campuses, contrary to popular imagination, are (like most schools) very sheltered, safe places. College students are not subject to more assaults, murders, or rapes than the rest of the population. Attending college is not a risky proposition. For as much as students talk about creating "safe spaces," campuses are already just about the safest spaces on earth.

This notion that privileged young people are uniquely endangered is false, and must be dispelled. Students who fear for their lives when they encounter an idea that offends them are living in fear for absolutely no reason. It isn't healthy, and it makes it easier for authority figures to trample their rights in exchange for increased protection.