Obama in Cuba: "I Have Come to Bury the Last Remnant of the Cold War"

President tells Cuban people the US will not impose any system on them; calls on Castro to "not fear" democracy. 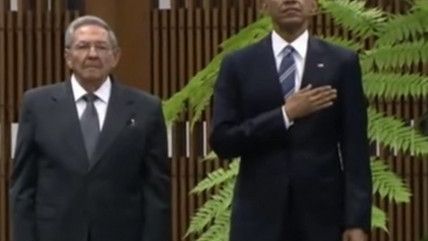 told the approximately 1,500 people assembled in Havana's el Gran Teatro, "I have come to bury the last remnant of the Cold War" and that his presence in the Cuban capital is meant "to extend the hand of friendship to the Cuban people."

Obama began his address, aired on state-run Cuban television, by noting that he and President Raul Castro have many philosophical differences which they have "discussed at length." He then spoke about both countries' history of colonization by Europeans, saying "Cuba, like the United States, was built in part by slaves brought here from Africa" and that both countries "welcomed immigrants who came a great distance to start new lives in the Americas."

After making some cursory references to shared cultural appreciation of things like music and baseball, Obama spoke about why he has asked Congress to lift the Cuban embargo, calling it "a burden on the Americans who want to work and do business or invest here in Cuba." The president added:

What the United States was doing was not working. We have to have the courage to acknowledge that truth. A policy of isolation designed for the Cold War made little sense in the 21st century. The embargo was only hurting the Cuban people instead of helping them. And I've always believed in what Martin Luther King, Jr. called "the fierce urgency of now"—we should not fear change, we should embrace it.

Later, Obama promised the Cuban people, "We will not impose our political or economic system on you," but then quoted the words of 19th century Cuban poet Jose Marti, "Liberty is the right of every man to be honest, to think and to speak without hypocrisy."

Obama appeared to be trying to beat Raul Castro to the punch by decrying America's "economic inequality; the death penalty; racial discrimination; wars abroad" and "too much money in American politics." But, Obama then admonished Castro to "not fear the different voices of the Cuban people—and their capacity to speak, and assemble, and vote for their leaders."

Reuters reports that Obama met privately with about a dozen dissidents at the US embassy, including Berta Soler, one of the leaders of the Ladies in White, a dissident group made up of the wives of political prisoners. More than 50 members of the Ladies in White were arrested during a protest timed with Obama's landing in Cuba on Sunday, and yesterday, Castro indignantly denied Cuba held any political prisoners at all.

Following the speech, Obama attended an exhibition baseball game between the Tampa Bay Rays and the Cuban national team.

According to BaseballReference.com, scores of Cuban national team players have defected to the US over the years, with many more Cuban baseball players also fleeing the socialist island nation to live and work in the United States.