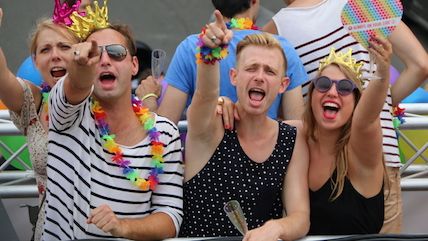 The National Union of Students' LGBT Campaign—a coalition of British student-activists—passed a motion to end committee representation for gay men, because they aren't as oppressed as other LGBT individuals: like students of color and transgender students.

That's the latest hilariously self-parodying move by the famously illiberal NUS, an organization wholly dedicated to the enshrinement of safe spaces and the abolition of free expression at British universities. NUS routinely attempts to deny speaking platforms to people who have ever expressed any views that violate far-left social justice orthodoxy (Germaine Greer, Peter Tatchell, and Julie Bindel are three recent examples).

According to Pink News, delegates at the LGBT Campaign's yearly gathering decided that "Misogyny, transphobia, racism and biphobia are often present in LGBT+ societies. This is unfortunately more likely to occur when the society is dominated by white cis gay men."

University LGBT clubs are often run by committees that have a trans representative, a gay male representative, a student of color, and so on. But since white cis gay men are relative enablers, rather than victims, of oppression, NUS endorsed a motion that calls on these clubs to stop extending automatic representation to them. The conference resolved, "To encourage LGBT+ Societies that have a gay men's rep to drop the position."

Pink News noted the irony of the motion—other approved motions stressed that gay men were at increased risk of HIV infection, and even violence, relative to other marginalized groups.

Other motions were just as absurd. One asserted that the 'A' often found in the LGBT+ acronym should and must always stand for "ace" (as in, asexual), rather than "ally."

It's easy to laugh at these developments, though they speak to a real sickness on the left: hysterical obsession with group identity. In the eyes of the NUS LGBT Campaign, no one is an individual—everyone must be labelled according to their sexual preference, skin color, and gender expression, and then assigned a grievance based on the collective wisdom of their similarly marginalized peers.