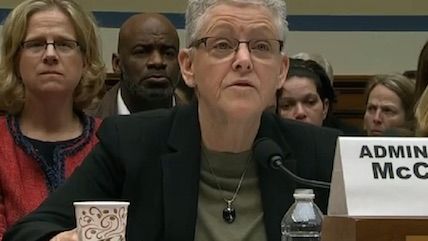 Michigan Gov. Rick Snyder and Environmental Protection Agency Administrator Gina McCarthy testified at a congressional hearing on Thursday about their failure to prevent and ameliorate the Flint water crisis.

But only one seemed particularly contrite: Snyder.

Democratic lawmakers who questioned the governor certainly thought he should resign. Similarly, the Republicans were tougher on McCarthy than they were on Snyder. But the most interesting and revealing moment came when Rep. Jason Chaffetz, a Republican and chair of the House Oversight and Government Reform Committee, asked both Snyder and McCarthy whether their organizations—the state of Michigan, and the EPA, respectively—had made mistakes.

After asking Snyder whether he had apologized—Snyder confirmed that he had—Chaffetz asked the governor this:

Chaffetz: "Did the state of Michigan do something wrong?"

Chaffetz: "Administrator McCarthy, did the EPA—in your mind, did the EPA do anything wrong?"

McCarthy: "I don't know whether we did everything right. That's the challenge I'm facing."

The exchange begins at the 1:17 mark.

The EPA, of course, did plenty wrong. As Reason's Shikha Dalmia explained:

The Michigan Department of Environmental Quality, the state agency that is responsible for implementing federal EPA environmental standards and ensure water standards, ignored citizen concerns that there was something wrong with the water they were getting from the new Flint River water system. The city had temporarily switched to this system after deciding against renewing a 30-year contract with its existing supplier, the Detroit Water and Sewage Department that wanted Flint to pay higher rates and more stranded costs. (This was like asking someone who is struggling to prevent the roof on his/her house from collapsing to pay for a lavish home insurance policy.)

The EPA allowed the DEQ to perform a faulty test to measure water quality that totally failed to catch the problem. That's not all that the EPA did wrong, however. Even after it realized that the DEQ wasn't taking a simple step necessary to prevent lead poisoning – namely adding phosphorous – it did absolutely nothing. It didn't go public with this information; it didn't warn residents that they should take steps to protect themselves. It basically fiddled as Flint residents were getting poisoned. What's even more infuriating? It would have cost less than $50,000 annually to add the phosphorous.

The state of Michigan needs to be held accountable for its inaction. Keep in mind the state workers living in Flint received clean water a year before anyone in the government was even willing to admit the drinking water was unsafe.

But regulators need to be held accountable, too. Snyder knows he screwed up, and has admitted it. Why won't McCarthy do the same?