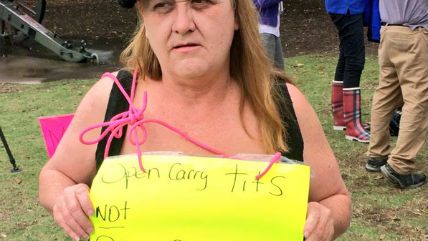 There was a lot of exposure on the first day of South by Southwest (SXSW) last week.

A pro–gun rights group, led by military vet and open carry activist C.J. Grisham, staged a walk from the Capitol building in Austin to the convention center at the heart of the city's big tech and music festival.

One-time Reason contributor Mac McCann has the story for The Austin Chronicle:

Shortly after noon, a woman, who chose not to be identified for safety reasons, arrived on the scene wearing signs with slogans like "More Boobs, Fewer Guns" and "Boobs for Peace." … She said Austin is about peace and love and hippies, not guns. Chanting almost nonstop for the entirety of the event, the woman shouted things like "My tits are political," and "I'd rather have my 56-year-old boobs flopping around than have guns in my town."

As the event went on, tensions rose between Grisham and the topless woman. As he was trying to talk to the media, the woman chanted "more boobs, less guns," jiggled her breasts, mooned the open carry activists, and traded insults with Grisham. … In the background of the heated debate, schoolchildren on a field trip got a little more of an education than their school likely intended.

While their disagreements were clear, the debate between Jin and Grisham (which focused more on campus carry than open carry) was much more civil than the earlier interactions. [Gun rights activist Candy] Martin said she'd love to have a beer with Jin sometime, and Grisham later described on the Open Carry Texas Facebook page "the honor of meeting" Jin, whom he described as "a wonderful young lady … for a liberal."