Postmodernism, the ongoing crisis of authority, and the Libertarian Moment. 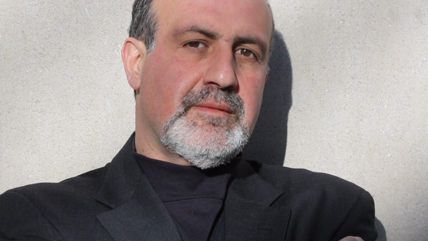 The last time Black Swan and Antifragile author Nassim Taleb came up in conversation at Reason.com was hardly auspicious: He backed out of a debate about GMO foods with Science Correspondent Ronald Bailey, whom he called an "idiot" for good measure.

But then there's this important bit that Taleb recently posted to his Facebook page that's worth quoting in its entirety:

What we are seeing worldwide, from India to the UK to the US, is the rebellion against the inner circle of no-skin-in-the-game policymaking "clerks" and journalists-insiders, that class of paternalistic semi-intellectual experts with some Ivy league, Oxford-Cambridge, or similar label-driven education who are telling the rest of us 1) what to do, 2) what to eat, 3) how to speak, 4) how to think…and 5) who to vote for.

With psychology papers replicating less than 40%, dietary advice reversing after 30y of fatphobia, macroeconomic analysis working worse than astrology, microeconomic papers wrong 40% of the time, the appointment of Bernanke who was less than clueless of the risks, and pharmaceutical trials replicating only 1/5th of the time, people are perfectly entitled to rely on their own ancestral instinct and listen to their grandmothers with a better track record than these policymaking goons.

Indeed one can see that these academico-bureaucrats wanting to run our lives aren't even rigorous, whether in medical statistics or policymaking. I have shown that most of what Cass-Sunstein-Richard Thaler types call "rational" or "irrational" comes from misunderstanding of probability theory.

Ironically, given his recent contretemps, Taleb is in agreement with Bailey's basic thesis in the urgent February Reason cover story, "Broken Science: What happens when cancer doctors, psychologists, and drug developers can't rely on each other's research?" The title and subtitle pretty much gives away the plot, so I won't go into any details here. Suffice it to say that two other features in that issue, one about the state of political polling and one about non-rigourous research on the effects of gun policy on violent crime, are also on point here.

Reading Taleb's exhortation reminded me of Moisés Naím's excellent The End of Power, which states at one point:

Power is shifting—from large, stable armies to loose bands of insurgents, from corporate leviathans to nimble start-ups, from presidential palaces to public squares. It has become harder to wield power and easier to lose it, and the world is becoming less predictable as a result. As people become more prosperous and mobile, they are harder to control and more apt to question authority.

And of Edward Snowden's statement in his recent interview with Reason:

…in Russia there are prohibitions on who and how you can love one another as there were in the United States quite recently. And this kind of thing is being challenged in ways that I think will be difficult to subvert. Does this mean that sort of great powers are just going to you know throw their hands up, give up, and walk away? I think that's unlikely. However, the individual is more powerful today than they ever have been in the past.

Something is happening here, and we do know what it is, Mr. Jones: It's what Matt Welch and I have dubbed the Libertarian Moment (and which Matt will be defending later this week at the Cato Institute in D.C.; sign up to attend or livestream here). In an American context, critics are quick (desperate even) to discuss the Libertarian Moment—"comfort with and demand for increasingly individualized and personalized options and experiences in every aspect of our lives"—only in terms of partisan politics. That allows for a simple, dismissive equation: As goes Rand Paul's presidential run, so goes libertarianism.

But such a banal formulation fails to account for, among other things, the broad-based, globalized hollowing-out of authority and control that Taleb, Naim, and Snowden are talking about. Way, way back in 1979, Jean-Francois Lyotard, at the behest of Quebec's University Council, published The Postmodern Condition: A Report on Knowledge (the first American edition came out in 1984). Lyotard didn't invent the term postmodern, but he helped famously define it as "'incredulity towards meta-narratives'—suspicion regarding grand theories that claim to explain every cough, hiccup, and burp in human and natural history." It wasn't that the '70s invented skepticism, if not reflexive cynicism, toward authorities of all sorts, from scientific to political to cultural. It's more accurate to say that that gloriously misunderstood decade made it impossible to ignore what everyone knew was true: Your leaders were not only fallible, they were self-interested, and almost certainly full of shit.

Since then, several developments have proceeded apace. First and foremost, the powers that be in virtually every part of the planet have continued to reveal themselves as incorrigible, both in their pretenses to knowledge and their ability to act in a truly disinterested way. As important, the rest of us have gained confidence borne out of higher levels of education and wealth; we no longer feel as submissive as we once did. And finally, modern technology and communication have allowed us to route around once-unquestionable authorities, whether we're talking about governments or religious leaders or aestheticians or whatever. As with the profusion of sects that followed in the effective disestablishment of state religion in 17th-century England (scroll to end of linked article!), we not only know there are more and more ways of being in the world, we are more and more comfortable with that knowledge—and we are more empowered to start creating the worlds in which we want to live.

The pace of this breakdown in authority is in some ways revolutionary and in some ways glacial. As the techies used to say of the future, it is not evenly distributed. Nor is it a simple triumphant march toward Progress or any fixed end state; it's an endless discovery process that each of us will shape and participate in. It creates space for chaos even as it allows for liberation that was unthinkable even 10 or 20 years ago (can any of us in the West really grok the decline in global poverty and the narrowing of planetary inequality?).

But it is the essential precondition of the Libertarian Moment and it is whipping across the planet like that "Benghali typhoon" that Wired's Louis Rossetto talked about in that mag's first issue. Those "paternalistic semi-intellectual experts" that Taleb disses need not apply.

Reason interviewed Taleb in 2013, when Antifragile had just come out.