The Pentagon produces an impressive, humanlike robot. Where all this headed? 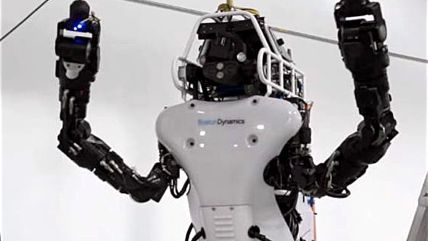 In what could be the last time that a human taunts a robot with a hockey stick and lives to brag about it, the latest demonstration of the Atlas Robot has prompted renewed fears about the future of intelligent machines.

Born in 2013, Atlas is a DARPA-funded robot developed by Boston Dynamics. Its latest iteration stands at a very human-proportioned 5'9, weighing 180lbs. Like Lee Majors circa 1974, each successive version of Atlas has gotten better, stronger, faster than it was before.

What can Atlas do? Aside from scaring the bejesus out of genius technophobic Oxbridge physicists, it's intended to perform tasks in emergency situations too dangerous for humans. Climbing ladders, driving vehicles, carrying heavy objects, and negotiating rough terrain are all in its disaster response repertoire.

One task Atlas won't attempt anytime soon is cleaning up Japan's Fukushima Daiichi nuclear plant. Custom built robots were designed to swim underwater and negotiate its damaged tunnels, in order to find and remove hundreds of tons of melted radioactive fuel rods. So far, every robot sent into the reactor has failed, their wiring nuked by the intense radiation.

The Department of Defense has stated that it has no interest in using Atlas in warfare. That may well be so. But the next generation of intelligent robots may be capable of reacting to dubious Pentagon claims with human-like incredulity.

Does this new species of Robo sapiens gives you hope for the future? Or does it cause more anxiety than Sarah Connor in a mental institution? The wildly popular Atlas video struck a nerve with YouTubers, prompting ample portions of both wonder and worry.

One futurist who's brimming with techno-optimism is Jason Silva, the host of Brain Games on the National Geographic Channel. In a recent interview with Reason TV, the loquacious Silva told us why Stephen Hawking is wrong about the future: we should look forward to our benevolent robot overlords, because we will become them.