U. of Arizona Marginalized Students Demand Trigger Warnings, Censorship, Half a Million Dollars 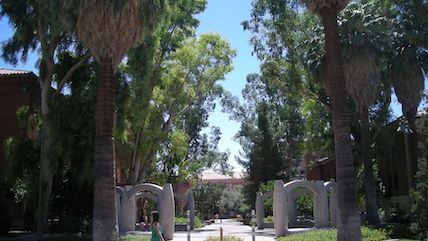 The Marginalized Students of the University of Arizona have published their demands: like a lot of student-activists at other colleges, they want mandatory trigger warnings, sanctions for microaggressors, and obligatory cultural sensitivity training. They also want half a million dollars. For diversity.

Demands common to all oppressed participants include mandatory trigger warnings, which should be present in all classrooms in order to preempt "potentially problematic material." Alternative assignments must be made available to any and all students who are made unsafe by the regularly scheduled curriculum.

The marginalized also want mandatory cultural sensitivity training for nearly everyone on campus: residence hall staff, members of Greek Life, and even the staff of the student newspaper, The Arizona Daily Wild Cat.

The Provost for Diversity and Inclusion would receive a budget of $500,000 to sponsor new diversity initiatives.

The list of demands also includes specific items from each group. The Latino/Latina student group wants to prohibit Border Patrol recruitment on campus; the Black Lives Matter group wants separate and additional sensitivity training; and the Asian-American students want everyone on campus to recognize that "we're not all the same." The LGBT student-group had a lengthy list of demands including more staff for their center, mandatory preferred pronoun usage in classes, and a redefinition of violence to include "emotional violence."

All groups want their own unique safe space on campus for members of their identity group.

The College Fix attempted to interview a student about the demands: the student replied, "You'll never understand a marginalized student's experience unless you are one, have experienced these things, or surround yourself with other individuals who have."

To recap: members of an organized movement that includes a half dozen activist communities are demanding unlimited funding for their narrow left-wing goals, mandatory re-education of those who disagree with them, and censorship of dissenters. I don't know if these students can properly be described as "marginalized," but if they are, everyone who values free expression at U. of A should hope they remain that way.