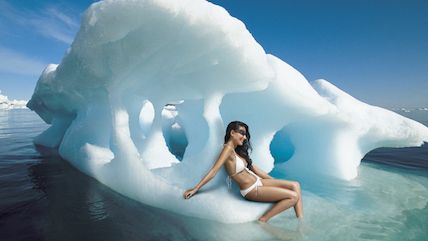 What does gender theory have to do with climate change and the depiction of glaciers in popular culture? You can decide for yourself by reading what must be the least essential paper ever written: "Glaciers, Gender, and Science—A feminist glaciology framework for global environmental climate change."

The recently published, utterly incomprehensible paper was co-authored by a team of historians at the University of Oregon, and funded via a grant from the National Science Foundation. I hope American taxpayers feel like they got their money's worth. From the abstract:

You are probably wondering whether I am trolling you. You might be checking the date to make sure this isn't an April Fool's joke. Surely a satirist who set out to write a deliberate parody of left-wing papers using the jargon of the earnest social justice warrior could not have done a better job than a paper on "just and equitable human-ice interactions."

But the paper is real—very real. The University of Oregon, in fact, put out a glowing press release touting its existence.

"What I'm trying to do in my research is provide more of a human story about how shrinking glaciers, warming temperatures, changing precipitation, how that plays out for different people," said lead author Mark Carey, an associate dean of Oregon's history department, in a interview accompanying the press release.

I'm sure Carey is well-intentioned, but if his goal was to put a human face on climate change, he failed. The paper is simply impossible to read with a straight face. It employs liberal buzzwords—colonialism, marginalization, masculinist discourses, etc.—with such frequency that the entire thing comes off like a joke. Just try to follow along with this paragraph:

Feminist and postcolonial theories enrich and complement each other by showing how gender and colonialism are co-constituted, as well as how both women and indigenous peoples have been marginalized historically (Schnabel, 2014). Feminist glaciology builds from feminist postcolonial science studies, analyzing not only gender dynamics and situated knowledges, but also alternative knowledges and folk glaciologies that are generally marginalized through colonialism, imperialism, inequality, unequal power relations, patriarchy, and the domination of Western science (Harding, 2009).

Remember, this is a paper about how to feminize a giant hunk of ice.

In his write-up of the study, Powerline's Steven Hayward quips, "This is why you get Trump." He's not wrong. Disaffected college students are rebelling against the hegemonies of leftist dogma and political correctness that rule their campuses—and "Trump!" is, sadly, their rallying cry. In a country where working class people are being forced to fund research on the postcolonial gender theory of melting ice caps, is it any wonder some of them are rooting for a charismatic demagogue who promises to bully their tormentors?