Ted Cruz on Illegals: "Yes, We Should Deport Them…Of Course You Would, That's What ICE Exists For"

Is this really something that libertarians can or should get behind? 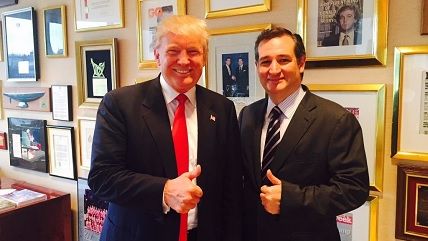 I remain perplexed by libertarians who talk about Ted Cruz as a palatable alternative to Donald Trump. Trump is a self-evident authoritarian, right? Cruz, such folks say, may not be at all libertarian but at least he's a "constitutionalist" and thus recognizes limits on the size, scope, and spending of government.

Does anyone believe this would not be massively disruptive, not just to illegals (including their often-fully legal children) but to tens of millions more law-abiding citizens and aliens? Cruz's blind insistence that you have to follow the law as written calls to mind discussions between the Pharisees and Jesus in Matthew 12 as well as the role of Captain Vere in Billy Budd, to cite two well-known examples of sacrificing what is good or wise for what is technically legal.

In other instances, Cruz is fine with either challenging the law or celebrating those who disobey it. And this for me is where the senator's—or anyone's, really—insistence that we must do this or that because it is the law breaks down. Just as all politicians are fair-weather federalists (if even), all go back and forth on whether we should follow or maintain this or that law based on the actual law in question.

Cruz notoriously defended Kim Davis, the Kentucky county clerk who refused to issue marriage licenses once same-sex marriage was legalized. Davis did not just refuse to do her job out of a misplaced sense of conscience, she refused to allow any marriage licenses be issued under her watch. Oh, but that was just the Supreme Court overruling elected legislators, right? Well, it's still the law. The reason Cruz and other anti-gay-marriage conservatives supported her was because of the specific issue at hand. The constitutionalist Cruz has similarly argued against lifetime tenure for Supreme Court justices, calling instead for "judicial retention elections" and he is against the generally accepted understanding of birthright citizenship as defined in the Constitution.

Which is to say the ultimate question in front of us, especially in election seasons, isn't whether something is the law but whether the law is right or not.

In the exchange with O'Reilly above, Cruz's main justification is simply that illegals are here in violation of current law. Sure, that's true. But such as argument elides whether current immigration policy is good policy (and hence law). And it ignores that immigration law can change rapidly, as it did in the 1920s, when Congress enacted baldly racist quotas based on what country you were coming from, and in the late 1980s, when Ronald Reagan and Congress overnight changed the status of millions of illegals. Any discussion of policy that relies mostly on "this is the law" rather than an explanation of why the law is good or bad is ultimately a dodge, not a constitutional argument.

Especially from a libertarian point of view, it seems absolutely in error to argue that deporting 12 million people makes sense or is a good use of federal resources. Illegals don't steal jobs from Americans or have much if any effect on wages. They cause less crime than comparable native-born Americans, pay a lot of taxes (and would gladly pay more if given work permits), and help boost the economy. The idea that the federal government, of all things, should be dictating the labor supply seems insane to me. And don't buy the argument that illegals cost the welfare state more than they kick in through taxes and work efforts. Illegals are barred from virtually all forms of welfare and to the extent that they do get any benefits, that's simply an argument against the welfare state, not immigrants. Note also that the same argument is often made against legal immigrants, too, and is similarly off-base.

Again, this is all from a libertarian perspective: I understand that conservatives have other (equally false) anxieties about cultural solidarity or political fallout of immigrants. Being anti-immigration has become a litmus test for conservatives and it is pushing them into truly odious places where they are calling for national I.D. cards in the form of E-Verify and asking questions such as "Does Immigration Mean The End of Western Civilization?" I understand that liberals and progressives have often disliked low-skilled immigrants because of a first allegiance to unionized labor.

We libertarians are a different breed, though. We tend to acknowledge that if there is widespread avoidance of a given law—say drug prohibition—it is probably because the law is fundamentally stupid, unenforceable, or both. As long as people aren't hurting others, better to change the policy rather than go apeshit crazy in trying to enforce something that is widely flouted.

So I'm curious to get a sense from libertarians, who generally support open borders in goods, services, and people, why they think Cruz's immigration policy wouldn't massively empower the federal government to enter all aspects of our everyday lives in a way that would be far worse than simply changing the abitrary status of legal vs. illegal.