Liberals don't trust corporations to run Flint's water system. But they should. 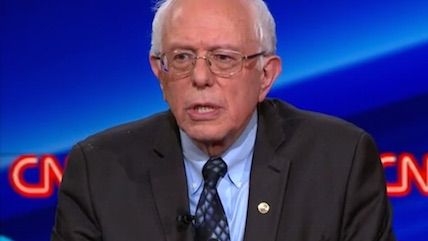 Hillary Clinton and Bernie Sanders both sharply criticized state and local government officials for mismanaging Flint's water supply while sneering at the idea that privatization could possibly be the answer.

In doing so, the Democratic presidential contenders did a disservice to the people of Flint who hosted the candidates for yet another debate on Sunday night.

Clinton and Sanders both called on Michigan's Republican Gov. Rick Snyder to resign for his role in the crisis.

"The governor should resign or be recalled," said Clinton. "We should support the efforts of citizens attempting to achieve that."

Clinton said the her election to the presidency would usher in an era of greater government transparency, accountability, and regulation that would prevent something like the Flint water crisis from happening again. She also called on the federal government to send aid to Flint, even though the state could raise sufficient funds if it ended some of its more costly—and pointless—PR stunt campaigns.

Sanders, too, was critical of government's failures with respect to Flint. "You are paying three ]times more for poisoned water than I am paying for clean water," said Sanders.

Their criticisms of government were spot-on: Flint's water crisis, in fact, is the result of foolish government-planned economic stimulus, compounded by pure mismanagement and bad incentives. And when push came to shove, the state put its own bureaucrats' needs well before the needs of its citizens.

But when debate host Anderson Cooper suggested that Flint's situation might be an indictment of government planning—and implied that the private sector could do better—Sanders mocked him.

"Maybe we should let Wall Street run Flint," Sanders suggested, oozing sarcasm. "We can trust them, I'm sure."

Sanders added: "I will trust the people to create a government that works for them, rather than Wall Street or corporate America."

These remarks show the extreme limitations of his corporations-are-always-evil shtick. Corporations did not poison Flint, but they are making millions of bottles of water available to its people. Corporations were not responsible for providing water to Flint—though they provide water to countless other municipalities, most of which happily renew their contracts year after year. Corporations did not poison Flint, but if they had, they would have been sued. They could have been forced to make Flint whole again.

Sanders, and to a lesser extent Clinton, are so committed to a left-wing view of how resources should be allocated and managed that they can't even comprehend the idea that some force other than government might be better equipped to provide a service. Sanders finds the very idea deserving of mockery.

This is a tremendous failure of imagination on their parts, and betrays their reflexive hostility toward the idea that free people are capable of resolving each other's problems—to mutual benefit—when government gets out of the way. My colleague Shikha Dalmia has suggested that the best thing for the people of Flint might be allowing private interest to buy them out of their property and evacuate them to greener pastures. But it sure sounds like Clinton and Sanders won't appreciate that solution, since it doesn't require vigorous action from the state.