How Risk-Taking by the Wealthy Helps the Middle Class 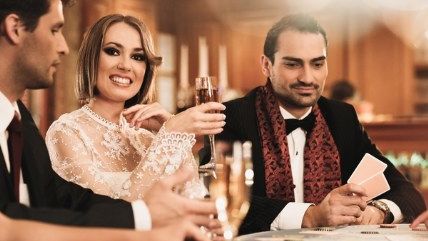 Hudson Institute senior fellow Jeffrey Anderson is the latest conservative theorist to offer up a tax plan meant to boost economic spirits. While his focus on growth is encouraging, his belief that middle-class tax relief is the source of broad economic bliss leaves a little to be desired.

Writing in the Wall Street Journal this week, Anderson decried the tax plans offered up by Republican presidential hopefuls given his view that their "biggest beneficiaries would be the top 1%, and they would substantially increase the $19 trillion national debt." Anderson's assumptions don't pair well with economic history.

Considering debt, it should be said up front that realistically all government spending is debt. Governments can only spend to the extent that they extract resources from the real economy first, at which point debt amounts to an accounting abstraction. A focus on debt misses the real barrier to economic growth, which is government spending itself. As the late Robert Bartley put it in his classic book on the Reagan economic revival, The Seven Fat Years, "The deficit is not a meaningless figure, only a grossly overrated one." Government spending is the true tax signaling resource consumption by politicians lacking market discipline. The unseen with the spending is all the experimentation (and yes, voluminous failure) that is never pursued by market-driven entrepreneurs (cancer cures, transportation innovations, technology advances that would render the internet dated) thanks to government existing as a size consumer of always limited resources.

Thinking about debt more broadly, Anderson's point is that large tax cuts will per his own modeling lead to massive revenue shortfalls for the U.S. Treasury. So while many would properly quibble with his assumptions about reduced revenue (tax cuts for the rich in the 1920s, '60s and '80s led to more tax collection, sadly), if deficits are Anderson's concern then he should cheer tax reductions that would actually reduce Treasury's intake. The reason for this is basic: high-revenue countries, like high-profit companies, can run up lots of debt, while low-revenue countries and struggling companies can run up very little.

We've seen the above with great constancy in modern times. Apple and Google have floated two of the biggest ever non-bank debt offerings in just the past several years alone. As for the countries with the most debt, a cursory glance reveals them as the most prosperous ones. Basically governments can run up a lot of debt to the extent that investors are comfortable with the ability of their tax collectors to secure payment from the productive citizenry. In that case, it's a paradoxical reality that the path to reduced national debt for the U.S. would be tax cuts so substantial that Treasury's revenue intake would actually decline. If so, investors wouldn't so eagerly line up to buy Treasury debt given reduced optimism about Treasury's ability to pay it back.

Lastly on debt, another "solution" to it would be tax increases so substantial that taxable economic activity would plummet. A severely depressed U.S. economy would similarly make U.S. debt unattractive, but since Anderson desires growth it's hard to imagine he would countenance such a plan.

Moving to the growth side of the equation, economic history is very clear about the path to staggering, economy-boosting advances. They spring from abundant failure. Two thousand carmakers were incorporated in the early part of the 20th century, only for 99 percent of them to fail. The advent of the personal computer in the '70s and '80s similarly left countless implosions in its wake. Moving to the internet technology boom that is happily still with us, most of those ideas have gone bankrupt too, or will go belly-up soon enough. As billionaire venture capitalist Peter Thiel explained it in his excellent 2014 book, Zero to One, "most venture-backed companies don't IPO or get acquired; most fail, usually soon after they start."

Thiel's observation speaks volumes about why Anderson's "Main Street Tax Plan" focused "on the well-being of typical Americans" would do very little to boost the economic chances of same. That is so simply because the typical American doesn't have much money to lose. By extension, the typical American must almost as a rule park his or her savings in companies that are already established and that have more predictable earnings streams. There's nothing wrong with the latter, but if growth is what Anderson desires, the simple truth is that job-creating innovation springs from more dynamic investing that by virtue of being dynamic is highly risky. This is where the rich come in.

The rich, for being rich, have money to lose. That's why much lower tax rates on wealth that is earned or inherited are so crucial to the economic well-being of everyone else. Precisely because the rich are flush with funds, they can take risks on the dynamic companies of tomorrow that are tautologically necessary for the prosperity that Anderson would like. Adam Smith was very clear that investment migrates away from economies that are stationary, and if the tax-cut focus is on the middle class, a more stationary economy will be ours. Such an economy will do little for the typical American whom Anderson would like to aid.

History is once again very clear here. Since the rich have money to lose, they alone can pursue the intrepid investments that make the typical American much better off. Indeed, it was J.P. Morgan who took a flyer on Thomas Edison's light bulb despite the protests of his father, it was Howard Hughes who brought a pile of inherited money to California in order to fund the aviation boom, families with names like Rockefeller, Vanderbilt and Phipps were the initial money behind the venture capital explosion out in Silicon Valley, PayPal co-founder Thiel was the money behind Facebook, and then Amazon founder Jeff Bezos was a pioneer investor in both Google and Uber.

And then it can't be forgotten that today's typical American is not infrequently tomorrow's wealthy American. This helps explain why the world's poorest are so desperate to reach the U.S. Success in the U.S. of the wealthy variety shouldn't bring with it a tax penalty; rather it should gift the ambitious with a tax reward.

But of greatest importance is the simple truth that intrepid investment is the path to the kind of prosperity that we all want, and that will lift all boats. That being the case, the quickest fix to the relatively bland outlook on Main Street is a reduction in the tax bill for those who live in the hills above it.

John Tamny is a Senior Fellow in Economics at Reason Foundation, editor of RealClearMarkets, Political Economy editor at Forbes, and a senior economic adviser to Toreador Research and Trading (www.trtadvisors.com).