Republican front-runner says he "will not order a military officer to disobey the law." 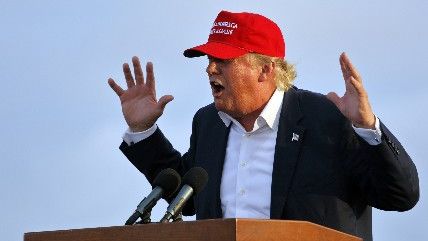 front-runner and founder of Trump University, has reversed his stance on ordering members of the military to commit war crimes.

Less than 24 hours ago at the GOP debate in Detroit, Trump insisted that no matter what people like former CIA Director Michael Hayden had to say about service-members refusing to murder the families of suspected terrorists or engage in illegal acts of torture, "They won't refuse. They're not going to refuse me. Believe me."

But much like Trump's positions on immigration (of which he said last night, "I'm changing, I'm changing!"), the candidate is evolving in real time on issues of international law and basic human morality.

In a statement released to the Wall Street Journal today, Trump wrote:

I do, however, understand that the United States is bound by laws and treaties and I will not order our military or other officials to violate those laws and will seek their advice on such matters. I will not order a military officer to disobey the law. It is clear that as president I will be bound by laws just like all Americans and I will meet those responsibilities.

Considering a significant part of Trump's appeal lies in his consequence-free ability to constantly say batshit-crazy things and never apologize for them, one wonders why he (or his advisors, whoever they are) deemed this particular outrageous sentiment (which he's voiced numerous times in the recent past) necessary to walk back.

Whatever the reason, it's a relief to know the likely nominee of one of the US' two major political parties understands that he too is "bound by laws just like all Americans."