Rubio Is Saying Nasty Things About Trump, but Let's Not Pretend This Isn't Politics as Usual

It's that time where some pointlessly fret about the mud-slinging. 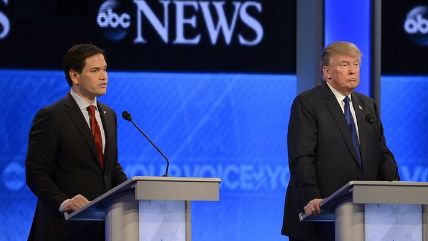 Sen. Marco Rubio managed to stay in the news over the weekend amid all the Oscar coverage. He did so by continuing to go after Trump. He and Sen. Ted Cruz hit him hard at last Thursday's debate, making it personal, calling Trump out for the lawsuits against his Trump University and his lack of any policy details, which as Peter Suderman has already noted, absolutely dosn't matter in this primary.

Rubio's weekend strategy was to continue riffing on Trump at rallies with jokey insults and personal attacks, sounding like every single comedian talking about the rich, crass real estate magnate. It's fighting fire with fire, mud with mud. And it got Rubio media attention, and that's certainly important for the candidate.

But it also drew out the expected, "Oh no, this election cycle is heading for the gutter" response. Tim Carney over at the Washington Examiner takes note of the mixed reaction. Republicans who loathe Trump are thrilled to see signs of his weaknesses as a candidate, but worry at the costs of pursuing them:

"He's 6'2," Marco Rubio said of Donald Trump Sunday night, "which is why I don't understand why he has hands the size of someone who's 5'2. You know what they say about men with small hands."

It was perhaps the most explicit small-penis joke in the history of presidential politics.

Rubio has crawled into the mud with his vulgarian opponent. This may be necessary if he is to beat Trump, but it clearly carries dire risks for a man who wants to come across as presidential.

"I liked him until he got down in the mud with Trump," Paul Eveland told me before the Rubio rally. While his wife, Ceci, is behind Rubio, Paul is undecided. Ceci granted that point: "It's disrespectful to the office."

Donald Lawrence calls Trump "a damn clown. I used to watch people like that on cartoons." But Lawrence, who was dragged to the rally by his wife, a Marco fan, doesn't appreciate Rubio's style of fighting the clown Trump. "It kinda made them look like they were a big joke," said Lawrence. "You get somebody who wants to joke around, you wonder how good a president they'll be."

Maybe that's another axis of confusion in this fight of "establishment" vs. "outsiders": a conflict over how seriously we ought to treat the president and how serious the president ought to be. Maybe part of the problem is that many people treat the presidency too seriously? Trump's candidacy revolves around him promising things to his constituents that he'll likely never be able to deliver. If the office of the president hadn't been able to develop to the point where checks and balances are few and far between and the president acts as though he can simply bypass Congress to get his agenda implemented, we perhaps wouldn't have to be worry about Trump's con job.

Much has been written about Trump appealing to those who feel marginalized by the nature of political power. Peggy Noonan noted that Trump's appeal is among Americans who feel "unprotected" by the manner by which politicians dole out power. For those who understand the kind of crony capitalism Trump represents, the conflict may seem very strange: Trump's completely at home at this kind of pay-for-play political system, and Rubio and Cruz both have attacked him for this very reason.

But what Trump is nakedly selling is that he'll be more than happy to use this power on behalf of those who support him and to punish those who oppose him. Trump's corruption is actually part of his selling point. And arguably it wouldn't work if Americans hadn't infused the role of the presidency with its current level of power. Trump is the natural conclusion for trajectory the presidency has been heading for a while. Don't blame the Ku Klux Klan. It's the fault of anybody who thought that the role of the president is to fix whatever ails the citizenry, separation of powers be damned.

And about the mud-flinging—It seems that we've reached the part of the election cycle where everybody pretends that it's the worst that we've ever seen. It's not. America has a history of very nasty election campaigns going back centuries. Watch more from ReasonTV below:

And while the attacks may have gotten Rubio more press, it's not clear that it's actually going to change anything. The latest polls give Trump a massive lead. We'll find out what happens tomorrow.