College Kids are Feeling the Bern

But they're willing to live with Hillary. 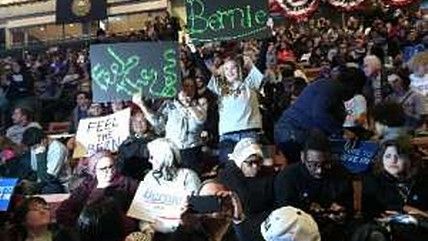 It's no secret that Bernie Sanders has won the hearts and minds of a majority of American college students. It's also becoming increasingly likely that he'll need to rely on a large turnout of young adults if he has any hopes of winning the presidency.

As Molly Ball wrote in The Atlantic:

In 2008, there were whole states Obama won on the strength of the youth vote. In North Carolina and Indiana, he won the under-30 vote and no other age group—but he carried both states in November because youth turnout was so high. That's the trick Sanders hopes to repeat, first in the primary and then in the general election.

Earlier this month, Reason TV covered the Democratic debate held on the campus of the University of New Hampshire in Durham, NH, where we spoke with supporters of both candidates:

The pro-Clinton crowd topped out at a modest 20-30, while the pro-Sanders group peaked at about 300 fervent demonstrators mainly focused on climate change and "keeping fossil fuels in the ground."

The Sanders supporters were loud, boisterous and frequently chanted in concert with a 7-piece marching band made up of middle-aged folks in colorfully eccentric attire. All of the demonstrators we spoke to were UNH students, many of whom would not commit to supporting Clinton if she ended up being the Democratic nominee. While they were all passionate about the environment, health care, and student loan relief, almost none of them were able to articulate how the democratic socialist senator from Vermont would be able to achieve or afford any of the policies they so passionately support.

You can watch these politically active college students express themselves in their own words in the video at the top of this page.