SC senator calls Trump a "loser," jokes about killing Ted Cruz on floor of the Senate. 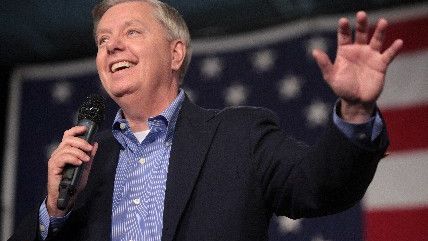 Lindsey Graham is still smarting from his

failed bid for the Republican presidential nomination, which rarely rose above 1% in the polls, and now he's in full DGAF mode when it comes to the remaining prospects in the field.

The South Carolina senator, known for never saying no to any military intervention or Sunday morning talk show booking request, unleashed his frustrations on the party electorate who so soundly rejected him in a series of comments yesterday.

First, Graham spoke with reporters in the Capitol basement, where he repeatedly used a form of Donald Trump's favorite slur on the Republican front-runner himself, calling the New York billionaire "generally a loser as a person and a candidate" who is "ill-suited for the job."

Later at the annual dinner for the Washington Press Club Foundation, Graham lamented "My party has gone batshit crazy" and compared himself to the deceased assisted-suicide doctor Jack Kevorkian for throwing his support to Jeb Bush after dropping out of the race. Bush suspended his very expensive failure of a campaign last week, but Graham's Twitter page still features a "South Carolina Backs Jeb!" banner.

Graham saved his most biting remarks for Texas Senator Ted Cruz, currently running a distant 2nd to Trump in most national polls:

"A good Republican would defend Ted Cruz," the South Carolina Republican said, pausing for effect. "That ain't me. If you killed Ted Cruz on the floor of the Senate, nobody would convict you."

The line reportedly ellicited big laughs and even though Graham believes Trump will "lose badly" in the general election, he begrudgingly said he would support The Donald in the event he wins the nomination.

Graham compared supporting Trump to taking a ride on the Titanic after you saw the movie, but what are you gonna do, this is a two-party system.