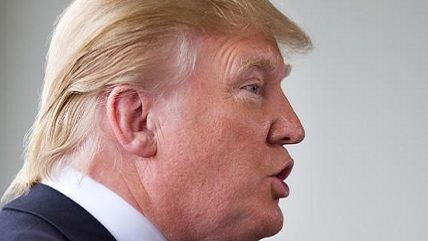 This is what it looks like when a broad-based social and political movement breaks up at its apogee.

The Republicans control both houses of Congress and an unprecedented number of state legislatures and governors' mansions. And it may well nominate for president Donald Trump, whose party loyalty is not fully clear but whose basic platform corresponds almost perfectly with that of the GOP establishment and the larger conservative movement.

So let the freakout begin, Republicans! You have nothing to lose but your minds! And maybe your party.

Here's the latest instance: Red State's Erick Erickson has flip-flopped on an earlier vow to vote for Donald Trump if the billionaire was the Republican Party's candidate for president. Erickson had disinvited Trump from a Red State conference last year after The Donald made awful comments about Fox News' Megyn Kelly. Still, Erickson allowed that he'd vote for the GOP candidate, even if it were Trump.

No more. What changed his mind? Trump's willingness to say something good about Planned Parenthood.

For eight years the conservative movement compromised itself as a wing of George W. Bush's Republican Party. The movement became ill defined and conservative became a synonym with Republican….

Donald Trump has had no "road to Damascus" conversion. He only wants to date the preacher's daughter. Once he's gotten in her ballot box, he'll be back to his pro-abortion New York values self. I'll play no part in this farce.

More in this vein here.

Here's what Trump has said about Planned Parenthood, which performs abortions and provides a range of other services related to contraception and women's health. It does get federal funding (about $500 million a year, though none of that money is allowed to be used toward abortions).

"They do some very good work. Cervical cancer, lots of women's issue, women's health issues are taken care of."

So brittle is the coalition that is the Republican Party and the conservative movement that such a statement is grounds for excommunication and excoriation.

So too is the Donald's willingness to let back in some of the millions of Mexicans he has sworn to deport. As National Review put it in its broadside against Trump:

Trump says he will put a big door in his beautiful wall, an implicit endorsement of the dismayingly conventional view that current levels of legal immigration are fine….

Trump piles on the absurdity by saying he would re-import many of the illegal immigrants once they had been deported, which makes his policy a poorly disguised amnesty.

So it is coming to pass that a candidate who has sworn to forcibly remove millions of illegal immigrants (and their children, even if those children are U.S. citizens), is not anti-immigrant enough to lead the Republican Party.

Rather than Trump, conservative Republicans are trying to figure out how to force Marco Rubio or Ted Cruz down the throats of an America that seems even less keen on that pair than on Trump himself. The conservative Republican backlash against Trump may well prove successful but that will only mean that in the name of purity and outrage, the GOP at the national level will have alienated itself even more from the growing number of people who refuse to call themselves Republican.

According to Gallup's latest figures, just 26 percent of us identify as Republican and there is no reason to think that number will jack up any time soon. That's especially the case when you look into how the country feels about Planned Parenthood (59 percent have a very or mostly favorable view) and illegal immigrants (65 percent think they should be allowed to remain in the United States and eventually apply for citizenship after meeting certain requirements).