The U.S. Should Stop Supporting the War in Yemen

The moral case for restraint. 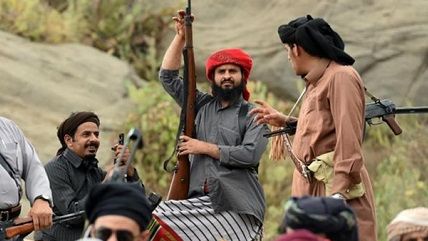 Yemen is the latest U.S. foreign policy disaster. For all the wrong reasons, the United States has been instrumental in enabling Saudi Arabia's ruthless war of choice in Yemen.

After almost a year of bombings, Yemen is a humanitarian catastrophe. Over 6,000 Yemenis have been killed—half of them civilians. According to a recent United Nations report, the Saudi-led coalition has "conducted airstrikes targeting civilians and civilian objects," including refugee camps, hospitals, weddings, and mosques. Saudi bombing has reduced large tracts of several cities to rubble. Some of the attacks, according to the U.N. panel, could amount tocrimes against humanity.

As of this month, over two million people in Yemen are internally displaced, millions lack access to potable water, and thanks to a U.S.-supported Saudi blockade on imports, more than 14 million Yemenis are at risk of starvation.

Throughout, the U.S. has quietly but dutifully lent the Saudis weapons, logistics assistance, and diplomatic cover. It's time to stop.

The civil conflict in Yemen has its roots in the overthrow in 2011 of long-time U.S.-Saudi ally Ali Abdullah Saleh. In the midst of the unrest, Saudi Arabia and the U.S. supported a political transition to a government headed by President Abed-Rabbo Mansour Hadi, in which he was the only candidate on the ballot. Yemen's Shiite Houthi rebels waged an insurgency against the Hadi government and captured the capital city Sanaa in 2014.

The civil war then morphed into an intractable proxy war when, in March of last year, Saudi Arabia decided to wage a vicious bombing campaign under the pretext of destroying the Houthi rebellion and reinstating Hadi's beleaguered government. Riyadh views the Houthis as a proxy of Iran, and after the peaceful diplomatic settlement between the U.S. and Iran over the latter's nuclear program, U.S. officials have apparently felt obliged to reassure Saudi Arabia by supporting its war in Yemen.

The problem is that Saudi Arabia's war in Yemen compromises both U.S. interests and its moral standing. Our interests are harmed because undermining the Houthis and contributing to the power vacuum in the country has benefitted the position of al-Qaeda in the Arabian Peninsula (AQAP), which happens to share Saudi distaste for the Houthis.

The Saudis succeed in garnering U.S. support in part by characterizing the war as a fight against terrorism. But the Saudis and al-Qaeda are actually in an awkward alliance in this fight, making U.S. help even more misguided.

As for our moral standing, by supporting Saudi Arabia's military action, we are a party to serious war crimes and are indirectly at fault for the devastating humanitarian crisis the people of Yemen now face.

The Saudi intervention clearly violates the just war tenet of jus ad bellum. That tenet dictates that nations not only have a just cause for going to war but also resort to military force only after all other options have been exhausted. Despite Saudi claims to the contrary, the intervention is clearly not a case of self-defense. The notion that Yemen, the poorest country in the Middle East (kept afloat primarily by Saudi funds), represents a military threat to Saudi Arabia is absurd. And to argue Saudi bombs are justified to prevent future terrorist attacks is to argue for preventive war, which violates just war theory and the UN Charter.

The Saudis insist that their actions are legal because the legitimate Yemeni government invited military intervention. But the Hadi government hardly deserves the label legitimate. Hadi was elevated to the presidency after serving in Saleh's autocratic regime as vice president. Once president, Hadi used his position to consolidate power against the Houthis and Saleh loyalists all whilemisappropriating billions of dollars. A better description would be to call the Hadi government a tool of Saudi Arabia, since Saudi Arabia not only brokered the deal that allowed him to replace Saleh but also enabled him to return to Yemen after the Houthis drove him from the country. Arguing that the Saudis are responding to a call for help is essentially to argue that the Saudis asked themselves to intervene in Yemen.

So, if Saudi Arabia's argument for intervention is weak, what's the U.S.'s excuse? Any claim that this is a part and parcel of the war on terror is dubious, considering the bombing of Yemen is, if anything, bolstering Islamic extremists. Furthermore, Saudi Arabia itself is a major exporter of the kind of jihadist ideology that drives groups like al-Qaeda and the Islamic State.

Even if it were about countering terrorist groups, if the threat to Saudi Arabia from Yemen is remote, the threat to the United States is certainly too small to justify violating the rules of war, international moral norms, and common decency.

Beyond placating overexcited Saudi fears of a U.S. strategic tilt towards Iran, there simply is no moral, legal, or strategic justification for what the U.S. is doing in Yemen.

A. Trevor Thrall is an associate professor at the School of Policy, Government, and International Affairs at George Mason University and a senior fellow at the Cato Institute.