Is California Infrastructure About Taxes or Priorities? 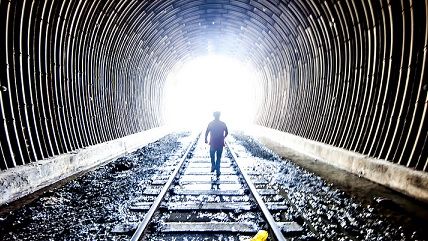 In his State of the State address last month, California Gov. Jerry Brown said he wants to pass new taxes to pay for the state's backlog of infrastructure maintenance: "Our overall state-deferred maintenance is staggering, estimated to total $77 billion… That means at some point, sooner rather than later, we have to bite the bullet and enact new fees and taxes for this purpose. Ideology and politics stand in the way, but… the roads must be fixed."

Brown's critics wonder why he won't "bite the bullet" and pull the plug on two controversial large-scale infrastructure projects that have an estimated tab that exceeds that $77 billion figure. If he believed the state's crumbling roads and bridges were such a priority, why doesn't he focus on that problem rather than on a $68-billion high-speed rail project and a $15-billion ($25 billion including related environmental projects) plan to drill tunnels under the Sacramento-San Joaquin Delta, they ask?

The projects might be useful but few call them essential. The bullet train to connect Los Angeles to San Francisco is unlikely to come close to the promised 2-hour-40-minute travel times given the latest plan would have trains share commuter tracks as they enter the crowded suburbs of both metropolitan areas. Backers have struggled to conform to the funding and cost promises made in the 2008 Proposition 1A  ballot measure authorizing initiation of the project, which has emboldened those who want another public vote.

The twin-tunnels project doesn't promise to necessarily bring more water to Southern farms and cities, but rather hopes to create a more reliable supply of water by protecting the endangered Delta smelt—and thereby reducing the need to occasionally shut down the pumps at Tracy to protect them. It's a more fundamental issue than the rail line, but tunnel foes have argued instead for a less-costly plan of shoring up the levees that currently hold back the Sacramento River water as it makes its way through the estuary to the water pumps.

A number of legislators are not only asking about the governor's infrastructure priorities, but proposing ways to redirect scarce resources from these big-ticket items toward the basics. Two prominent Republican officials, Sen. Bob Huff of Diamond Bar, the former minority leader, and Board of Equalization member George Runner of Lancaster, have proposed an initiative that would redirect most of the currently authorized bond proceeds from the rail project toward water storage. It seemed like a political poke in the eye of the governor, but it might get legs as Central Valley rail critics in particular get energized by the idea.

Two Democratic legislators representing Delta-area districts, Assemblywoman Susan Tallamantes Eggman of Stockton and Sen. Lois Wolk of Davis, have introduced legislation that would require California voters to approve in a statewide ballot initiative the tunnel plan. Currently, the governor says no vote of the people or Legislature is necessary to move forward on it.

An independent voter measure, by Stockton farmer Dino Cortopassi, is called the "No Blank Checks" initiative. Currently, California voters must approve any projects funded through general-obligation bonds, which is debt backed by taxpayer dollars. Cortopassi's initiative would also require a statewide public vote for $2-billion-plus government projects funded by revenue bonds. Such bonds are funded through tolls and fees. These typically are used for bridge and toll-road projects and – no surprise here – for the tunnel project Cortopassi opposes.

Cortopassi has been funding political messages about the state's budget situation in newspapers across the state  (including the Union-Tribune), so it seems likely he has the funds to champion his measure, which already has qualified for the November ballot. This will be a bigger problem for the tunnels than the Eggman/Wolk measure given the latter has little chance of getting through the Legislature and no chance of getting the governor's approval.

Recent polls give aid and comfort to opponents of the rail and tunnel projects. According to a poll late last year by the Stanford University-based Hoover Institution, 53 percent of likely state voters would support that Huff/Runner measure to redirect rail funding, while only 31 percent would oppose it. The tunnel project was a close call, with roughly a third of voters in support, opposition and undecided. The poll also found voters opposed by a two-to-one margin one possibility for raising transportation taxes—a tax on miles driven.

There's no doubt the governor has an uphill battle in funding his infrastructure priorities. Virtually every political interest group in California—business leaders, unions, Republicans, Democrats—agrees on the need for increased infrastructure spending. But the devil—or at least the ideology and politics—always is in the details. It's probably time for the governor to make a more persuasive case for his priorities.