Experts Quietly Admit to Senate Torture Report's Accuracy, But Does Anybody Care Anymore?

We have a presidential frontrunner who openly embraces abusing prisoners. 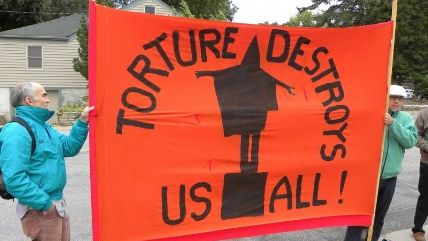 We all still remember that Senate torture report, right? Before consigning it to the dustbins of history do recall that Donald Trump just promised he would bring back waterboarding and do even "worse" to suspected terrorists if he were elected president.

At the time the report was released, after years of fighting between the Senate Intelligence Committee and the CIA and President Barack Obama's administration, the official pushback from the CIA was an admission that torture ("enhanced interrogation") did happen inappropriately and the oversight wasn't always the best, and they detained people that shouldn't have been detained at all, but they did get "actionable intelligence" from the process and prevented terrorist attacks. That was the story, and they were sticking with it—yes, it was terrible, but it worked.

But then, it turns out, the CIA has quietly updated its official response in such a way that validates some of the Senate torture report's claims. Much like a newspaper hiding a correction at the bottom of an inside page among the advertisements, the CIA posted a "note to readers" without telling anybody. According to Ali Watkins at BuzzFeed, it sat online for a year before outsiders noticed its existence.

One of the big debates of the use of torture involved the interrogation of 9/11 mastermind Khalid Sheikh Mohamed (KSM). Mohamed confessed to all sorts of things while he was being tortured, but according to the Senate's analysis, much of it was either fake or information the CIA had already gotten from other sources. The CIA resisted this interpretation, but now it has quietly admitted that the Senate's analysis is at least partly true. And the note also acknowledges some other mistakes:

Among the CIA's quiet corrections are that it did in fact misrepresent the importance of information obtained from 9/11 mastermind Khalid Sheikh Mohamed, known informally as "KSM," and in some cases, already had certain information that it had previously said was "unavailable" prior to KSM providing it.

In one instance, the CIA says, it misrepresented a timeline of information obtained from KSM in capturing an al-Qaeda affiliated terrorist known as Hambali. The issue, it writes in the "Note," was a "sequencing error."

By "sequencing error," they mean that the information they say they extracted from Mohamed via torture they had already gotten from other sources prior. Read more from BuzzFeed here.

Meanwhile, the Senate's analysis of the CIA's torture methods has also been bolstered by the chief military prosecutor at Guantanamo Bay. Adam Goldman of The Washington Post has gotten his hands on an unreleased prosecutor's statement by Brig. Gen. Mark Martins that says the facts listed in the report about how KSM was treated are all accurate and actually occurred:

Three CIA prisoners, including Mohammed, were waterboarded in what agency medical personnel described as "a series of near drownings," according to the Senate report. Detainees were also beaten, forced into confinement boxes, deprived of sleep for long stretches and subjected to rectal rehydration. Unapproved techniques included mock executions, and one detainee died after being left in the freezing cold at a facility in Afghanistan. …

Defense lawyers want access to all documents about the treatment of their clients and ultimately plan to use the issue of torture as a mitigating factor to argue against the death penalty if the defendants are found guilty.

This agreement doesn't necessarily put Martins "at odds" with CIA Director John Brennan the way Goldman contends. Remember that the dispute between the Senate Intelligence Committee and the CIA is not over the facts of what was done to these prisoners, but rather who knew what was going on, who was overseeing the program, and whether it actually worked. It was never about which terrible things were done to KSM or other terrorists (or innocent people confused with terrorists).

When I wrote about the Senate report back when it was released, the big takeaway was not the horrible descriptions of what the CIA did to people, though that certainly got the most press. Rather, it was the depressing, bureaucracy-driven nature of the conflict trying to establish timelines of who authorized what, who knew what, where information actually came from, and trying to penetrate layer upon layer of ass-covering concealing what actually happened.

And does it even matter anymore? In the wake of new terrorist attacks on American soil we have Trump promising to do whatever the hell gets cheers from the crowd. His unpredictability, deliberate vagueness, and willingness to outsource the actual solutions to "experts," combined with the secrecy of the CIA, should be of great concern. Getting kicked out of America under President Trump might be the least of a Muslim citizen's worries.