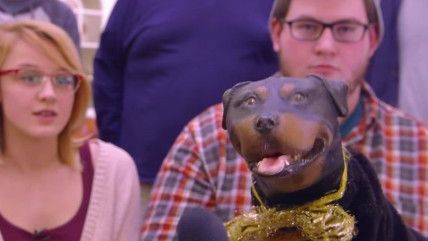 "Can I hump your leg? I know I look like a dog, but I identify as a shinguard."

That's how Triumph the Insult Comic Dog, of Conan fame, addressed a female University of New Hampshire (UNH) student in a segment about campus political correctness for Triumph's Election Special 2016, which streams on Hulu.

The state university was a natural choice to be pooped on not only for its relevance to the presidential primaries but also for its short-lived but self-parodic "Bias-Free Language Guide," which declared words like "American," "mothering," and "healthy" to be beyond the pale of civilized discourse.

Triumph's alter ego, Robert Smigel, has described his puppet character as a parody of a Borscht Belt hack comedian, akin to a less-charming Don Rickles. For the better part of two decades, the rubber puppet has been "punching down" at hapless victims of his rapier wit, such as the "nerds" waiting in line for a Star Wars premiere. But he has likely never encountered a more humorless group than the dozen or so UNH undergrads in this video.

I won't ruin the microaggressive jokes by transcribing them, but near the end of the segment, a completely over-the-top walking stereotype of a flamboyantly gay African-American man walks into the room, and you can practically see the smoke emanating from the heads of the students as they try to find a non-problematic way to describe him.

These earnest college kids are clearly trying to do what they've been conditioned to believe is the right thing, which is to avoid stating things in plain and understandable language in order to spare hurting anyone's feelings. But the effort is both futile and absurd, which might be the point.

As Smigel told Ben Collins at The Daily Beast:

I told the kids, "Act like you believe in what you're doing and saying," so they might have actually gone a bit too far. I can't tell how that one actually plays because usually people laugh when they're being made fun of. These kids were trying to hold it in.

This quote indicates that the UNH students might not actually be as uptight as they appear in the video, which is a good thing! Laughing at yourself isn't "punching down," is it?

Reason TV recently asked students at Occidental College how they feel about the school's proposed system for reporting microaggressions. Watch below.