Cam Newton and the Libertarian Moment 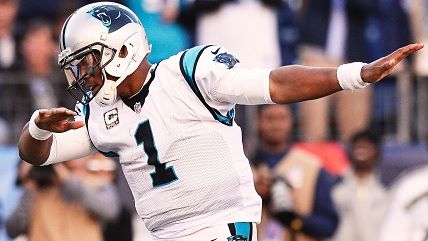 A lot of people want to tell Cam Newton what to do. The Super Bowl-bound quarterback, who went 15-1 in the regular season with 636 rushing yards and 3,837 passing yards, has always been animated during the game, showing excitement and celebrating when his team does something well and melancholy when they do something poorly. This, apparently, is a problem. Professional sports athletes aren't supposed to show emotion.

"I've come to this point in my life with I've been faced with so much good, bad or indifferent that I try to check myself if I'm trying to judge somebody," Newton said last week. "I think we are all guilty of it at times, but if we look in the mirror or look in our own closet, we see that we're not perfect. There was only one person who walked this green earth who was perfect, and we know who that is. That's not Cam. That's not you. That's not anybody."

That wasn't the portion of the statement that got the most play in the media. Later, Newton offered one explanation for the criticism he faces for his style of play, "I'm an African-American quarterback that may scare a lot of people because they haven't seen anything that they can compare me to."

He continued: "I remember when I was working out for the draft, I would see the Senior Bowl and see these guys out there busting their tails to try to get drafted, to try to have a job to provide for their family or themselves. And there I was, doing exactly what I wanted to do and how I wanted to do it, and when I look in the mirror, it's me.

"Nobody changed me, nobody made me act this certain way. I'm true to my roots, and it feels great. Yet people are going to say what they want to say, and if I'm in this world living for that person who is going to say this or that, then I can't look at myself and say I'm Cam Newton because I'd be living for (my critics)."

The next few days of sports radio were filled with white callers wondering why Cam Newton had to bring race into it, and think pieces about how obviously racism was the problem here. They say Green Bay quarterback Aaron Rodgers doesn't get called out for it. Rodgers was also criticized for joining the Wisconsin Badgers on the court after a victory at a game he attended, and other players believe it's in poor taste for fans to take selfies with him. You succeed, people want to tell you what to do. You fail, people want to tell you what to do.

At Forbes, Eric Macramalla argues some fans find Newton arrogant, and that it's his personality that drives criticism. Macramalla welcomes that personality. He also argues Newton couldn't possibly experience racism, which is a dim view, but one that gains currency in an environment where so much of the politics racializes. Either Newton can't possibly experience racism as a black man or the NFL is like modern day slavery.

A lot of the media jumped on the racialized aspect, even if they may have been trying to defend him, doing what Newton pointed out about his critics, that they want to tell him who to be and define who he is. Ron Rivera, the Panthers' coach, said he'd also like to believe criticism of Newton was about "his personality more than anything, the idea that you should be stoic when you play this game. But I think a lot of people disagree, a lot of people think you should come out and have fun." It's a kid's game, Rivera said, even though there's "a lot" of money involved. "At the end of the day it's about entertaining and having fun. If you're not enjoying yourself, don't play the game; it's that simple."

This pre-game media frenzy surrounding Newton is just one example of the libertarian moment all around us. The moment is cultural as well as political, and insofar as politics gloms onto the culture in the same way government gloms onto the society, the culture's always ahead of the politics. As Nick Gillespie and Matt Welch explained in The Declaration of Independents, the libertarian moment is primarily pre-political.

From bitcoin to 3D printers to legalizing consensual non-violent behavior, it's about consent and cohabitation. If you're into it, do it. If you're not, don't. Don't tell someone else what to do because you're uncomfortable. Cam Newton dresses, dances, does charity, and plays quarterback the way he wants to play it. As he should. The old school pundits complaining about his attitude or style will just have to get over it. The world is increasingly moving toward a more libertarian place where individuality, freedom and choice are celebrated. Newton's expressions and actions during the Super Bowl will be another vivid reminder of that.