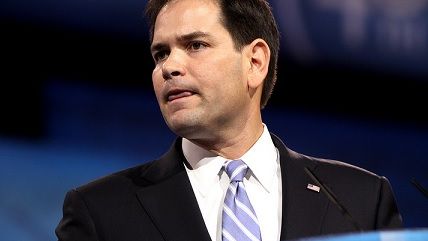 At a town hall in Iowa, Republican presidential candidate Sen. Marco Rubio (Fla.) promised the federal government would "hire 20,000 new border agents instead of 20,000 new IRS agents," according to The Guardian's Sabrina Siddiqui.

Rubio's come a long way on the issue of immigration since his 2013 efforts to work on "comprehensive immigration reform" with the bipartisan "Gang of Eight." That effort failed—the House of Representatives never brought it up for a vote, with Republicans saying "border security and interior enforcement must come first," even though the 2013 immigration bill included 3,500 new border patrol agents, and billions of dollars for new fencing along the U.S.-Mexico border.

"Border security first" has become the standard Republican line headed into 2016, and as anti-immigration sentiments appeared to have helped propel Donald Trump to the top of Republican polls, Republican candidates are working furiously to outflank each other on immigration.

Rubio, for his part, has not been able to shake off the legacy of trying to work on immigration reform. Last month, fellow presidential candidate Rand Paul characterized Rubio's position on immigration as "open borders." That description, Brian Doherty noted, was outright wrong. Far from being in favor of anything resembling "open borders" (or the free movement of people and goods across the border), Rubio supports more border enforcement, immigration tracking, e-verify (requiring employers to act as immigration agents when employing), and shifting visas from family-based to "merit-based." The policies largely mirror Paul's, and, with respect to e-Verify, go even further.

Trump and others regularly reference Rubio's participation in the 2013 immigration reform effort to paint him as no true Scotsman restrictionist. At a recent town hall, Rubio said he was open to allowing illegal immigrants to apply for green cards—to Breitbart that was the equivalent of supporting "amnesty."

Rubio's new call for 20,000 more border patrol agents would double the number of agents there were in 2011, which itself was a doubling of the number of agents since 2004. For years, Obama has touted his increase in border patrol agents, saying in 2011 that he was continuing a buildup that started under George W. Bush. While Obama argued the increased enforcement should open the door for broader reform since it representing putting "border security first," he also acknowledged the political realities. "I suspect there will be those who will try to move the goal posts one more time," Obama said at the time. "They'll say we need to triple the border patrol.  Or quadruple the border patrol."

Now Rubio's called for doubling the border patrol again. How long before another Republican calls to triple it, painting Rubio as weak on immigration control and pushing the party further into restrictionist territory.