Very reminiscent of critiques against Obama back in 2007 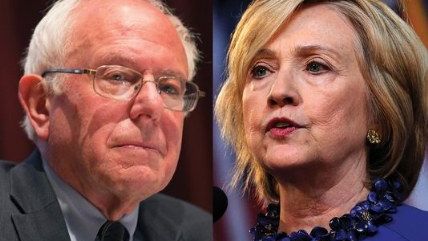 Hillary Clinton must run on her foreign policy "expertise," because it's pretty much all she has seriously separating her from Bernie Sanders at the moment (besides an economic policy that's about five percent less awful).

But we mustn't forget that Clinton's foreign policy positions are rather bellicose and interventionist. So that means when she starts hitting at Sanders for his proposals, it really highlights her militant nature. Now that her critiques of Sanders are picking up (because Sanders' poll numbers are picking up), so are the observations that her positions are maybe a touch a little rightward of where a good chunk of Democrats might want to be right now.

In last weekend's Democratic debate, Sanders called for trying to "aggressively normalize" relations with Iran, while not ignoring the country's role in supporting terrorism and anti-American fomentations. This prompted Clinton's campaign to attack him for not being tough enough. From The Hill:

"This proposal to more aggressively normalize relations and to move to warm relations with Iran not only breaks with President Obama's policy, it breaks with the sober and responsible diplomatic approach that's been working for the United States," Jake Sullivan, Clinton's senior policy adviser and the State Department's former director of policy planning, told reporters in a conference call.

"The proposal would not succeed, but it would cause very real consternation among our allies and partners."

"I can safely predict that Republicans would love to have a debate with someone who thinks we should move quickly to warmer relations with a major sponsor of terrorism like Iran," Fallon said. "Bernie Sanders represents that caricature that Republicans like to put forward."

Fallon's comments are particularly interesting, given that he is arguing that Clinton's position is more defensible and acceptable to Republican-leaning voters than Sanders' is. It's not actually an argument about whether her policies are more responsible—just that it's more palatable to frightened general election voters. Sullivan did put out a video that attempts to explain why Sanders' positions are not very well-considered while hyping up Clinton's experience. Nevertheless, arguing that a Democratic candidate shouldn't hold a particular position because Republicans won't like it is an odd tactic from somebody trying to outpace a reputation for holding positions on the basis of political expediency.

Joshua Keating at Slate notes that Clinton is sounding a lot like she did back in 2007, when Barack Obama was the candidate of peace (equally hilarious and angering in retrospect, yes?) and she was the militant sentinel ready to pop awake at a 2 a.m. phone call to make all the important decisions:

It's a little strange that Clinton would choose to go down this road, given past experience. In a 2007 Democratic primary debate, also held in Charleston, South Carolina, Barack Obama responded affirmatively to a YouTube question about whether he would be willing to meet "without precondition" with the leaders of countries like Iran, Syria, Venezuela, Cuba, and North Korea. The Clinton campaign seized on the answer as evidence of Obama's lack of foreign policy qualifications, with Clinton herself calling it "irresponsible and frankly naïve." As you'll recall, that line of attack didn't quite pan out for Clinton. (The concerns also proved mostly unfounded as the Obama administration waited until midway through his second term to change the status quo with Cuba and Iran. Syria is a whole other ugly story.)

I'm not sure it's as strange a tactic to use this time, though. Recall the tremendous left activism against war that helped sweep Obama into office. And then that activism melted away even though, in fact, Obama mostly continued to perpetuate the military interventionism he campaigned against. Clinton's campaign is actually cleaving to Obama's policies here (notice the Obama reference from Sullivan). That's been her strategy. If anything, replicating her 2007 primary attack shows how little Obama succeeded in ultimately executing a different foreign policy from what Clinton offered.

Sanders' campaign does offer an antidote to both Clinton's and the Republican candidate's militarism for voters on the left (as Robby Soave noted earlier in the week), but it's still an open question as to whether Democratic primary voters are looking to reject Obama's foreign adventurism, not just the Republican Party's.

Need a Clinton foreign policy refresher? Nick Gillespie reminded us all recently, "A vote for Hillary Clinton is a vote for war."