Hillary Clinton Shouldn't Be So Proud of the Affordable Care Act

Obamacare is not a good deal for taxpayers. 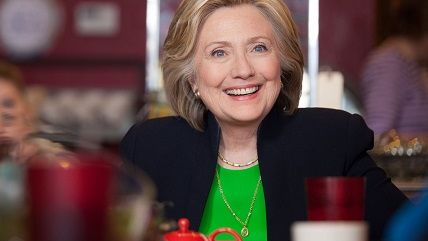 During the Democratic presidential debate, former Secretary of State Hillary Clinton mentioned that as president she would build on President Obama's signature health care plan. The Affordable Care Act "is one of the greatest accomplishments of President Obama, of the Democratic Party, and of our country," she added. I beg to differ.

First, the ACA didn't reform the health care system. It just threw trillions of dollars at an already dysfunctional system. In the next 10 years alone, ACA spending will be at least $1.5 trillion.

To our already burdensome tax system, it also adds many new taxes, including an individual mandate excise tax, an employer mandate tax, a 3.8 percent surtax on investment income, an excise tax on comprehensive health insurance plans, a hike in Medicare payroll tax, a Medicine cabinet tax, and many more.

The law's subsidies—available to lower-income people to make the ACA plans more appealing—are also a huge drag on the economy, since they drop sharply as income increases. As such, it's not surprising that the Congressional Budget Office projects the ACA will reduce work by an amount equal to two million full-time jobs and lower the nation's economic output by half of 1 percent. However, University of Chicago economist Casey Mulligan thinks the negative effects of the ACA will be twice as large as the CBO projects.

The ACA's many mandates increased individual market premiums by close to 50 percent between 2013 and 2014. And those mandates are burdensome, even for employer-based plans. For instance, a new study by Harvard and Stanford Universities finds that the popular dependent care mandate will have very unpopular consequences: It lowers wages for workers at firms with employer-based coverage by $1,200 every year. And here's a prediction: Politicians will be quick to blame the reduction on greedy employers, and rather than remove the mandate, they'll try to fix the problems with more mandates.

Second, remember the whole "if you like your plan, you can keep it," debacle? The ACA led 5 million people to lose their plans in 2013, and many more have lost their plans since then.

Third, as my Mercatus Center colleague Brian Blase notes, 2016 enrollment will likely be at least 10 million people below the expectations when the ACA was passed. The nature of enrollment is also a big problem for the law's future. Blase's recent work highlights that people with at least middle-class income are still largely shunning exchanges and enrollees are skewing much older and sicker than expected. This is why premiums increased 12 percent on average this year even as exchange plans get worse. The news that the ACA is being gamed as people wait until they're sick to enroll for coverage reveals the law's poor construction.

While exchange enrollment is well-below expectations, about 13 million more people are enrolled in Medicaid in 2015 than in 2013. That anyone would be proud of throwing more people into Medicaid has never made any sense to me. The best that can be said about Medicaid is that it gives poor people something they didn't have before. However, it's hardly the best way to give the poorest in America better health outcomes.

First, the empirical evidence shows that Medicaid often provides second-class care. Poor access and poor health outcomes are often the fate that awaits Medicaid beneficiaries, including the need for greater reliance on emergency rooms and higher mortality rates. Also, a new paper by economists at MIT, Harvard and Dartmouth found that Medicaid recipients only benefit by 20 to 40 cents for each dollar of Medicaid spending. Can we all agree that this is a terrible return on taxpayer dollars?

Finally, insurers in the exchange have reported that customers appear to be gaming the new system—not just by signing up when they need care, but by then dropping it. As a result, the largest insurer in the country, UnitedHealth, is talking about withdrawing from the exchange in 2017, leading some to wonder if the whole system will collapse.

In view of these poor performances, you've got to wonder how Clinton would like to build on it or call it the best accomplishment of her political party.