Christie might believe in food freedom but he's a militant drug prohibitionist. 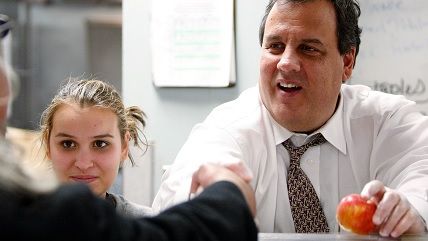 "The first lady has no business being involved in this," Christie answered, telling the boy he could eat whatever he wanted at school if Christie were elected president. There are plenty of good reasons to oppose Obama administration's school lunch program initiative, many of them articulated here at Reason over the last few years. Christie did not hit on them substantively, and shows no hint he understands them based on his other policy views.

"Using the government to mandate her point of view on what people should be eating every day is none of her business, it just isn't," Christie told the 11-year-old. Yet the same could apply to marijuana use. Using the government to mandate Christie's point of view on what people should be smoking or not is none of his business. Christie has argued he would enforce the federal laws against marijuana even in states that have legalized it. The new school lunch program initiative came via legislation too, the 2010 Healthy, Hunger-Free Kids Act, and efforts are underway now to replace (but not necessarily repeal) it.

For that matter, New Jersey considered raising the minimum age for buying cigarettes from 19 (already above the age of majority) to 21. Obesity may be unhealthier than smoking not just marijuana but also cigarettes. Christie vetoed the legislation.

Picking and choosing which parts of a free people's private life the government can intervene in doesn't make you any less of a nanny statist—Christie's answer on school lunches, juxtaposed with his militant prohibitionism on marijuana, helps illustrate that the primary difference in vision between Obama and the Republicans hoping to replace him is the particular flavor of authoritarianism.