Yes, Partisanship Can Be Frustrating, but It's Better Than the Alternative 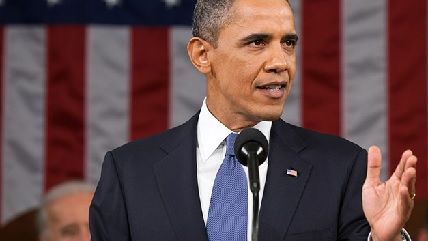 "It's one of the few regrets of my presidency—that the rancor and suspicion between the parties has gotten worse instead of better," President Barack Obama lamented in a State of the Union speech packed with rancor and suspicion about his political opposition. What the president probably meant—as most of those who claim to want less "partisanship"—is that he regrets so many Americans remain stubbornly attached to their own ideas about the world.

For this president, liberal certitude is never partisan, unlike the moral and intellectual corruption of the GOP position. "BREAKING," tweeted the Associated Press, "President Obama to say US faces choice between fear of change and confidence in its future." That was about right. Obama's SOTU was a crescendo of false choices pitting the future (bolstered by science, optimism and rational thinking) against the icky past (anti-science, anti-love and anti-reason). Francis Wilkinson put it well in Bloomberg View when he noted that Obama's performance was not a speech but an indictment.

The president, despite offering a scattering of platitudes about the importance of genuine public debate (Paul Ryan was singled out for expressing an interest in "tackling poverty," because, as you're all surely aware, conservatives normally champion destitution), never really acknowledged that the views of his detractors could be formed by some sincere, philosophical objection about the best approach to fixing things—or even that Americans might disagree on what exactly needs fixing.

But, you know, if you're not psyched about transforming every leftist hobbyhorse into the next space program, it can only mean you're terrified of the 21st century.

Obama went on to claim that democracy doesn't work if we believe that "the people who disagree with us are all motivated by malice." I don't know about that. Through seven years of his presidency, liberals have regularly accused political opponents of being motivated by racism, misogyny, bloodlust-driven warmongering, selfishness and an irrational and mysterious need to destroy democracy at the behest of the super-wealthy.

This is not just the position of columnists, bloggers and activists but also that of the leadership of the Democratic Party. How many times has Obama argued that Republicans only reject his ideas because they have some deep dislike of him personally? And how many times have we heard that Republicans are basing their ideas on conspiracies? "Anyone claiming that America's economy is in decline is peddling fiction," the president said. Anyone who believes in human adaptability over climate alarmism values partisanship over the fate of the earth. Anyone who is critical of illiberal ideologies and faiths is a xenophobe.

"If we want a better politics, it's not enough just to change a congressman or change a senator or even change a president," he explained. "We have to change the system to reflect our better selves." Obama, who spent over $1 billion keeping the presidency in 2012, will discover his better self by campaigning to limit free speech for those he deems have too much money—and other special interests (abortionists, unionists, rent seekers, crony clean-energy groups and other morally uncorrupted interests excluded)—to blunt rigorous debate.

Which reminds me: My favorite part of Tuesday's speech was the president's assertion that the Founding Fathers wanted us to argue about "the meaning of liberty." This was the only time Obama mentioned the word "liberty" in his speech, and when he spoke about "freedom," it was never in the context of the Constitution.

Now, I wouldn't claim to know exactly what the founders desired for us, beyond mentioning that they codified many ideas of the Enlightenment and specifically wrote them down for us to follow, sometimes even numbering them so we would understand. Although they certainly debated some of these notions, it is implausible to believe that any Founding Father would be OK with forcing the Little Sisters of the Poor to pay for someone else's birth control or forcing Americans to report to a bureaucracy such as the IRS before engaging in political speech. Progressives want to redefine freedom as a form of dependency and common good, not argue about its traditional contours. So yes, some people are suspicious of "change."

Meanwhile, the president believes that early-20th-century Progressive economic ideas are the freshest thing going. Fine. But by any historical measure, arguing that markets can't serve the public good without being micromanaged by the state is no bolder or newer than arguing for a renewed laissez-faire attitude. An inability to implement those ideas does not mean politics is broken. We have intractable disagreements.

We no longer have the capacity to come together on big policy. Fact is, I couldn't recognize America anywhere in Obama's long harangue, and I'm probably not alone. Anyone who believes he has a monopoly over the "future" deserves the suspicion and rancor that come with politics. It's not to say that blind partisanship or uniformity is productive or that Republicans have answers. But partisanship—as in prejudice toward a particular cause—allows us to avoid destructive national political "unity." So as rancorous as partisanship is, it's far less destructive than Obama's political ideal.