Climate change activists can be deniers, too. 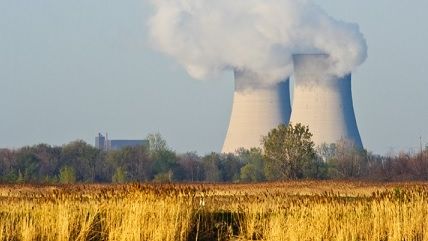 For years, climate-change activists have been ripping into skeptics for having closed minds. And for good reason. Generally speaking, the typical global-warming doubter takes the view that the convergence of evidence<http://www.vox.com/2015/12/11/9898098/climate-skeptics-consilience> from decades of peer-reviewed research by the world's best scientific minds is a bunch of politically driven horse-puckey—but any random blog post or talk-radio factoid challenging that scientific consensus is so plainly true it's not even worth checking. This is not what anyone would call an intellectually rigorous stance.

This does not mean that any given statement about climate change is irrefutable. Or that skeptics do not raise some good points. Or that scientists can never be wrong. It simply means that many climate-change skeptics don't like to confront facts that contradict their cherished beliefs. (Who does?) So they seize on evidence that might confirm their beliefs instead.

But climate-change activists fall prey to this confirmation bias, too. And a lot of them seem to be suffering from it with regard to nuclear power.

If you truly believe global warming is the greatest threat facing human civilization, then you ought to consider nuclear power a godsend. Restricting carbon-dioxide emissions to levels that can keep global warming within two degrees Celsius is immensely easier with nuclear power, and perhaps impossible without it.

Some climate activists are quick to say so. The Intergovernmental Panel on Climate Change's Fifth Assessment Report noted that global-warming mitigation scenarios anticipate at least a doubling, and perhaps a tripling, of nuclear power by 2050. The "stabilization of (greenhouse-gas concentrations) at a level consistent with (earlier agreements) requires a fundamental transformation of the energy supply system," the IPCC says. It cites research suggesting the need for "the construction of 29 to 107 new nuclear plants per year," depending on targets. The upper figure is "historically unprecedented."

During the Paris climate talks last month, James Hansen—one of the godfathers of the climate-change movement—joined with three other prominent climate scientists to issue a statement explaining why "nuclear power paves the only viable path forward on climate change." The "voluntary measures put on the table at Paris" are a "welcome step," they wrote, but far from sufficient. "The climate issue is too important for us to delude ourselves with wishful thinking. Throwing tools such as nuclear out of the box constrains humanity's options and makes climate mitigation more likely to fail." In fact, they conclude, "nuclear will make the difference between the world missing crucial climate targets or achieving them."

This provokes a fair amount of pushback. One piece in The Guardian went so far as to term such views "a new, strange form of denial." The author of that piece, Naomi Oreskes, is a history professor at Harvard. (Apparently history profs now know more about the subject than the IPCC, too.) Oreskes never even attempts to refute the conclusion about the need for more nuclear power. She simply disparages it.

It's easy to understand why. Many environmentalists consider nuclear power—pardon the technical jargon—really yucky. So they will argue that the world can ratchet back greenhouse-gas emissions without any nuclear power at all. There are entire campaigns built around selling the idea. You can visit their websites, which claim we can power the world with nothing but renewable-energy sources such as wind, water, and solar.

And on that point they are correct—in the same sense that it is correct to say you can run a mile in under four minutes. All you have to do is run four quarter-miles in under 60 seconds each, without stopping. Mission accomplished! And just as nothing in the laws of biology prevents you from running a four-minute mile, nothing in the laws of physics prevents powering the planet with renewables alone.

In the real world, there is a little more to it than that.

Acreage, for instance. Consider Dominion Virginia Power's new gas-fired generation plant in Warren County, which can generate 1,329 megawatts of electricity—on a slab of land measuring only 39 acres. To generate that much electricity from sunlight, you would need 36,000 acres of solar panels. That's 56 square miles. For comparison's sake, the entire city of Richmond is 60 square miles.

Dominion's North Anna nuclear-power station can produce up to 1,892 megawatts. To get that much energy from sunlight would require 65,000 acres of solar panels, or 101 square miles. That's slightly bigger than the area of Charleston, South Carolina or Milwaukee, Wisconsin.

Dominion can generate slightly more than 24,000 megawatts of power all together. To get that from solar power alone would require more than 1,000 square miles of solar panels. That's the equivalent of putting the District of Columbia (68.3 square miles) inside the commonwealth—15 times over. And while Dominion is Virginia's biggest electricity supplier, it is not the only one.

Granted, rooftop solar arrays and other forms of distributed generation would chip away at the need for dedicated real estate somewhat, but they can't offer the economies of scale that industrial-scale solar plants can, and that would be necessary under any realistic transition scenario. And the issues with solar power don't end there. In Virginia, solar facilities can provide reliable energy only about 25 percent of the time, because the sun isn't shining strongly enough the rest of the time. For all practical purposes, this means that every megawatt of solar energy needs a megawatt of backup power from some other source, such as a natural gas-fired plant that can be switched on quickly when the clouds roll in. A quantum leap in battery technology might change that, of course. (Fingers crossed!) But hoping technological revolution will magically make a problem go away is not a sober strategy for dealing with climate change.

Wind energy can help, but wind confronts similar challenges. It's an intermittent source of energy that takes up a gawdawful lot of space: anywhere from 30 to 141 acres per megawatt, according to the Union of Concerned Scientists, citing research by the National Renewable Energy Laboratory. And, as with solar generation, power companies can't simply turn the wind on and off when demand for power spikes or dips. So wind also needs backup generation—which raises the question as to just how carbon-free wind energy backed up by, say, natural gas generation really is.

Keep in mind that the challenges outlined above pertain to current electricity demand. But only about 40 percent of U.S. greenhouse gas emissions come from electricity generation. Transportation accounts for another 34 percent. So switching from gasoline-fueled vehicles to electric vehicles will drive total electricity consumption much higher.

How much higher? Well, one gallon of gasoline equates to about 34 kilowatt-hours. Average American gasoline consumption is roughly 392 gallons per person and 1,000 gallons per houshold.

This means switching one household's gas-powered cars for electric ones would require about 34,000 more kilowatt-hours of electricity per year. Right now, the average residential utility customer uses less than 11,000 kilowatt-hours a year. In other words, dispensing with the internal-combustion engine would quadruple the typical household's electricity consumption. If solar energy provided all that new juice, then Virginia alone might need something like 4,000 square miles of solar arrays—taking up an area almost three-fourths the size of Connecticut. (And that's for Dominion customers only.)

Note that so far, we haven't even touched on issues such as environmental permitting—or cost. Environmentalists often point out that nuclear power plants are hugely expensive, and they are right about that. But the U.S. Energy Information Administration estimates that a quarter-century from now, the levelized cost of solar energy—that is, the total cost of all inputs over time—will remain roughly twice that of nuclear energy. Offshore wind will be another 50 percent more expensive on top of that.

For years, global-warming skeptics have accused global-warming activists of acting in bad faith. The activists don't really want to save humanity from catastrophic climate change, the skeptics argue—they really just want to expand government's reach and impose their own quasi-religious vision on the rest of society. Activists retort that this is nonsense: The fate of the planet hangs in the balance, and if mankind does not take radical steps soon, then we are all in extremely serious trouble. How those activists confront the need for more nuclear power could offer a good indication of who is telling the truth.

This article originally appeared in the Richmond Times-Dispatch.