Government Wants to Brand Sex Offenders on Their Passports 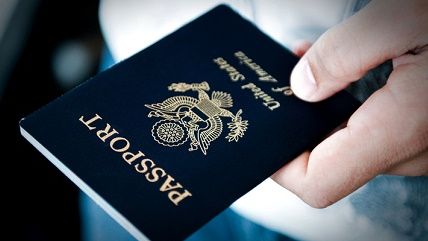 The government may start stamping "sex offender" on the passports of citizens who were convicted of a sex offense against a minor. Yes, that would include high school seniors who slept with their freshman girlfriends.

The rationale behind the International Megan's Law is that these people could be traveling for sex-trafficking purposes. (See Reason staff editor Elizabeth Nolan Brown's fantastic piece on the overblown myths about that crime.) But as I write in today's New York Post: "The problem is that the sex-offender label in no way reflects a person's risk of re-offending — or even whether they ever committed what I'd consider an actual sex crime." For instance, I don't think consensual teen sex is a crime.

The general belief is that sex offenders have one of the highest recidivism rates around — that they get out of prison only to offend again. Surprisingly, the opposite is true. A report by the Bureau of Justice followed almost 10,000 sex offenders after their release from prison. It found that 5.3 percent were rearrested for a sexcrime within three years. That means 95 percent of those labeled "sex offender" didn't re-offend — a recidivism rate lower than for any other crime except murder.

About a quarter of them got on the list when they were juveniles themselves, because young people have sex with other young people. Labeling all of these offenders' passports means branding hundreds of thousands of citizens who won't commit another sex crime.

The branding—which already passed the Senate last month and is awaiting a vote in the House—will affect even Americans whose offenses aren't crimes in the countries they're trying to visit:

For instance, I have a friend who had sex, once, with a 14-year-old when he was 19. If he had done this in Austria, Germany, Portugal or Italy, it wouldn't have been a criminal act at all. The age of consent there is 14.

But here in America he went to prison — for nine years. He spent his 20s in a cell for one act of consensual sex between two teens, and now that he's out, he remains on the Sex Offender Registry for life. What a country!

If my friend's passport is stamped with "Sex Offender," any country he approaches will assume he's a monster trying to get in.

Oddly enough, that country won't be alerted if a visitor has served time for, say, mugging old ladies. No one's American passport will be stamped with "Drug Dealer" or "Drunk Driver" or even "First-Degree Murderer Who Used a Pitchfork!"

Call it the Scarlet "S.O." But considering there are already federal laws in place requiring registered sex offenders to notify the Department of Justice if they're traveling outside the U.S., what purpose does this shaming serve?

Only to help politicians claim that they care about kids, even when the evidence shows they're doing nothing. Nothing, that is, except grandstanding.