There is a War on Christmas—In the History Books

The holiday has been surprisingly strife-torn since America's beginning. But today's controversies don't begin to compare to the colonial-era ban. 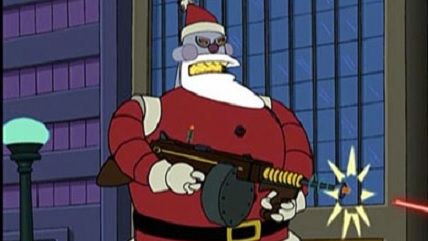 A war on Christmas? Has nobody seen Arthur Christmas? The North Pole has stealth technology and fanatical commando elves—you screw with that at your own peril.

But there was a time in America when celebrating Christmas was illegal. For 22 years in the 17th century, from 1659-1681, celebrating Christmas carried a hefty fine imposed by Puritans who viewed the holiday as a borrowing from pagan Roman celebrations. "Whosoever shall be found observing any such day as Christmas or the like, either by forbearing of labor, feasting, or any other way, upon any such account as aforesaid, every such person so offending shall pay for every such offence five shilling as a fine to the county," ordered the lawmakers of the day.

That this pagan source for the festivities is quite possibly true (let's have a shout-out to Saturnalia) shouldn't be a knock on the day to anybody who appreciates the human need to have a good time, whatever the justification.

Of course, this group doesn't include Puritans. Not a fun bunch. Under their rule, illicitly observing the holiday meant closing the shutters, staying indoors, and showing no particular sign of joy lest the authorities intervene and levy penalties.

Come to think of it, Boston hasn't changed all that much.

Prof. Paul V.M. Flesher of the University of Wyoming has nicely documented the long history of hostility toward Christmas among Christians. Protestant dissenters rejected not just Roman Catholic theology, but many of the trappings that they regarded as frivolous and unfounded in biblical sources.

"[T]he Calvinists in Switzerland banned all Christian holy days not mentioned in Scripture. That approach meant that the Sabbath was acceptable, but nothing else. Christmas, Easter, Pentecost and other celebrations were to be treated as normal days with nothing special about them."

At different times, bans on Christmas were imposed by religiously minded rulers on the continent, as well as in Scotland and England. And the Massachusetts Bay Colony, of course.

Christmas was technically legalized in Massachusetts in 1681, by a royal governor who shot right past liberalization and made the holiday compulsory (something of a recurring feature in human history).

Unsurprisingly, given the strong feelings involved, the holiday remained controversial even after the mandatory aspects, pro and con, were removed. Celebrants sometimes risked something that approached real warlike conditions. Anti-Christmas rioters (yes, I just wrote those words) besieged worshippers in King's Chapel on Christmas Day in 1706, smashing windows and throwing fists.

Actually, Christmas rioting has been kind of a thing, to the point of tradition. On Christmas Day 1826, about one-third of West Point cadets got plastered on eggnog and trashed their barracks. But this was less of a war on Christmas than a good Christmas party that turned into a war.

On a less violent and more killjoy note, Boston public schools punished as truants children who stayed home on Christmas up until the day was included in the first batch of federal holidays in 1870.

Modern commentators sometimes react with charges of a "war on Christmas" to attempts to make celebrations non-sectarian or secular to accommodate a society of many religious views, or none at all. Pull a stylized reindeer off your coffee cups or yank Santa visits from the school field trip schedule and you might as well be carpet bombing Bethlehem.

Never mind that corporations have been positioning to appeal to the most, and offend the fewest, customers since day one. And never mind that I had no idea that schools had ever started taking the tots to see the jolly old elf. Isn't that what bored parents are supposed to do in crowded malls on the Saturday after Thanksgiving?

"Yes, Virginia, there really is a war on Christmas," Liberty Institute CEO Kelly Shackelford insisted two years ago, while pointing to a number of restrictions on celebrations at public institutions. As if government officials ever needed an excuse to be ham-handed and over-literal in their interpretations of rules.

As for removing explicitly religious songs from school pageants… It's always a challenge to accommodate religious majorities and minorities in a diverse society. Leaving the religious celebrations out of institutions that everybody is forced to pay for and attend is not necessarily an unreasonable approach.

It's also much less intrusive than that 19th century Boston practice of punishing children who dared to stay home to celebrate the day.

In fact, nothing in the current litany of complaints begins to rise to the level of the outright bans on Christmas celebrations that marked the colonial period, or the official discouragement of the holiday that prevailed in parts of the country much later.  Nor do modern spats over the holiday begin to compare to the sectarian violence that once marked Christmas celebrations. When was the last time that somebody was fined or clubbed for enjoying the holiday in public, let alone on private property?

There is a war on Christmas in America—but it's in the history books.

So enjoy your Christmas, if you are so inclined. Invoke Jesus Christ, or Santa Claus, or ignore the day in favor of another holiday or no holiday at all (I try to indulge in all the fun ones myself).

Just take it easy on the eggnog. West Point is still living that down.