If You're Gay and Undateable, at Least You Can Now Donate Blood 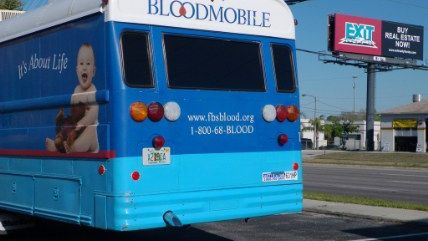 The Food and Drug Administration (FDA) is finally moving forward with ending its decades-old ban that blocked men who have ever had sex with other men from ever donating blood. The ban was instituted in the 1980s during the height of AIDS panic.

Since that time, the ability to check the HIV virus in blood has dramatically improved, thanks to science and innovation. The idea that gay men should never be able to donate blood became an absurd restriction. So it's been lifted, sort of.

The new policy is that gay men can donate blood, so long as they haven't had sex in a year. Think of it as a consolation prize for those who can't get laid. This matches the restriction on straight men who have sex with prostitutes—they have to wait a year—and matches restrictions on gay men donating blood in places like the United Kingdom and Australia.

The new rules are still, nevertheless, overly restrictive. There are tests now that can detect HIV in just two weeks after exposure, but some tests require as long as three months to pick up the virus. Having to wait a whole year is an unnecessary delay, both for gay men and frequenters of prostitutes. HIV groups complain that the new rules are still discriminatory and cut out thousands of potential donors who don't have HIV. But it will add more than 185,000 potential new blood donors, according to a University of California study.

I guess it's time for me to start working on that romantic comedy script about two lonely, brittle, caustic gay men (Will Forte and Bill Hader?) who meet at the blood bank and learn to actually love and be loved. It'll be a hit at all the festivals!