The 'Isolationist' Smear Against Ted Cruz

The term is becoming meaningless. 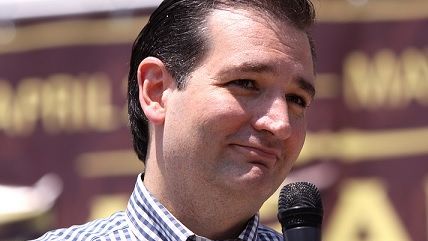 After the latest Republican presidential debate, the Washington Post's Jennifer Rubin argued that Sen. Ted Cruz had undone himself "courting" the "Trumpkin base," sinking "further into the far-right brew of isolationism and xenophobia." And to prove this contention, Rubin grabbed hold of two words Cruz used, "America" and "first," to claim that the senator from Texas was signaling support for 1930s/'40s-style isolationism.

This is a pretty popular accusation on the hawkish right. Marco Rubio has also called Cruz an isolationist. Having watched the debate, though, I think, as Donald Trump might complain, it is unfair. What I heard was not a case for isolationism but one against Middle Eastern democracy building—a project that's been a persistent and bloody failure, one that's sidetracked foreign policy from its "first" task, which is defeating the enemy.

You can certainly disagree with my assessment, but I'm relatively sure that merely holding a skeptical view of entanglements in the Middle East doesn't make anyone a potential America First Committee recruit. Yet here's the American Enterprise Institute's Danielle Pletka quoted in Rubin's piece: "Good for Ted Cruz for being honest. He doesn't want to be anywhere in the world, doesn't want America to lead, and harkening back to the likes of Pat Buchanan and Charles Lindbergh is truth in advertising for him."

Whether or not Cruz was dog whistling at Trump fans—and obviously, he's trying to lure them—nothing he proposed at the debate comports with Pletka's observation. Not even close. For one thing, Buchanan opposed the Gulf War, whereas Cruz proposes it as the ideal display of American military power. When a CNN moderator queried Cruz about his earlier desire to want to "carpet-bomb" the Islamic State group (and what isolationist doesn't support massive, indiscriminate bombing of foreign lands, right?), he answered that he is interested in "using overwhelming air power to utterly and completely destroy" the Islamic State.

I'm skeptical that saturation-bombing would solve the Islamic State problem or make the Syrian situation more agreeable in the long run. But I leave any policy certitude on the topic of beating the Islamic State or fixing Syria to think-tankers, completely unqualified explainer types, and pundits far smarter than I. What I do know is that "isolationist," much like "neocon," is quickly becoming a meaningless label, used not only to describe those who reflexively oppose American intervention but also to smear anyone who is unconvinced that trying to engineer democracies in Islamic societies through military power is a good idea.

This isolationist canard is part of a broader set of false choices that dominate foreign policy debates on the right these days. During the CNN debate, for instance, Wolf Blitzer asked Cruz, "So would it be your policy to preserve dictatorships rather than promoting democracy in the Middle East?"

The choice is almost never between democracy and preserving dictators; rather, it's either living with the ugly realities of the world or trying to change them and possibly creating new and uglier ones. Earlier this month, Cruz gave a speech at the Heritage Foundation, fleshing out his outlook by reviving Jeane Kirkpatrick's Dictatorships and Double Standards, which argued that disposing of autocrats in an effort to push democracy and protect human rights has not always worked in America's best interests.

Whether Cruz embraces these ideas for political expediency, we can't know. He is, like almost every Republican, trying to claim Ronald Reagan's national security legacy for himself. (The conservative icon was mentioned four times by candidates at the CNN debate, and three of those instances were by Cruz.) AEI's Gary Schmitt, unimpressed by this kind of talk, wrote a piece last week, which Newsweek titled "Ted Cruz Is Wrong About Cozying Up to Dictators." Schmitt pointed out that "when push came to shove, (Reagan) pressed strongmen in both South Korea and the Philippines to stand aside in favor of a turn to democratic rule."

This is true. The United States may have a moral duty to make the case for freedom and avoid "cozying up" to theocratic regimes, such as the one in Iran, that threaten their democratic neighbors, fund terror and spread illiberalism. But if dictators could simply be asked (or even compelled through force) to stand aside and we knew liberalism would flourish, Americans would be having a very different debate.

But Iraq is not 1945 Germany. Syria is not Japan. Libya is not South Korea. Asking the theocratic thugs in Saudi Arabia or the strongmen in Egypt and Pakistan to "stand aside" for democracy would almost certainly manifest in anarchy, widespread violence and more radicalism. If we trust Pew Research Center's study of the Muslim world—and everything recent history has shown us—it's clear that most Islamic-majority nations would be unlikely to embrace anything resembling Western democracy. Meanwhile, the process of democracy allows factional, religious and ethnic quarrels, always percolating, to reignite. The Arab Spring spurred more terrorism than it did liberalism for a reason.

Cruz is no libertarian; that's for certain. It's more reasonable to think of Cruz's position on American power—as one of his critics, Michael Gerson, put it in the Washington Post—as an "uncomfortable straddle" of both sides of the conservative foreign policy argument. This straddling means that Cruz's positions—whatever you make of them—will be less crisp than Marco Rubio's. What it doesn't mean is that Ted Cruz is the new Charles Lindbergh.