At Least Republicans Are Having a Foreign Policy Debate 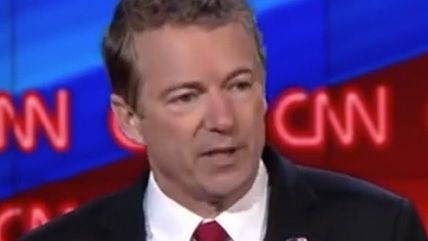 iThis week's Republican presidential debate brought on the usual fretting over the "scary rhetoric and fearmongering". More than a few of the Republican candidates do have troubling ideas about foreign policy and national security (and a host of other issues, just as Democrats do).

Sen. Marco Rubio (Fla.), the establishment's debate winner, for example, says the U.S. needs to escalate the fight against ISIS by getting Sunni "boots on the ground" and using more special operations forces, something the Obama administration is doing and that Democratic presidential frontrunner Hillary Clinton articulated as her stance on ISIS as well.

As Sen. Rand Paul (Ky.) has pointed out on the campaign trail Rubio's foreign policy is a lot like Clinton's foreign policy. Cruz drew the same comparison, to applause, saying Rubio supported the same kind of destabilizing policies in the Middle East as President Obama and Hillary Clinton.

When Gov. Chris Christie (N.J.) gave it his go to be the hawk on Syria Tuesday night, Rand Paul told the audience if they were looking for a candidate who'd start World War 3 they'd found hm. As Robby Soave noted, the same could be said of most of the candidates.

The Democrats too. Republican candidates often sound like Democratic ones when it comes to foreign policy and the war on terror. Both frontrunners, Donald Trump and Hillary Clinton, have proposed closing off portions of the Internet where they believe radicalization happens.

Yet the foreign policy pursued by the Obama administration, including for four years while Clinton was secretary of state, remains within the framework established during the Bush administration after 9/11. Joe Biden's "Bin Laden is dead" helped propel Obama to re-election, as did Obama's taking credit for ending the war in Iraq—something the president denied after ISIS (previously a "JV team," so much for nuance) started making significant territorial gains in that country.

The Washington Post notes Obama likes to boast of taking out terrorists, and tried to tally how many tens of thousands of terrorists President Obama had actually killed—the post counted not just insurgents but those Muslim males of military age caught in signature drone strikes as well as anyone killed who wasn't identified as a civilian.

Then Democratic-leaning observers wonder where the Islamophobic sentiment Donald Trump taps into is coming from. Some thirty percent of Democrats agreed with Trump on suspending Muslim immigration.

The desire for a rhetorically aggressive foreign policy too many Republican candidates are trying to satiate didn't emerge from a vacuum. Presidential candidates have been promising to "hunt down and kill the terrorists" for four election cycles now.

And yet on the Republican side, there is a debate about, and engagement of, the consequences of U.S. foreign policy that are sorely lacking among the Democratic presidential candidates, and not only because Clinton's only significant challenger is an economic populist.

Rand Paul, the candidate who most forces such a debate, almost didn't make it on the stage this week. The lean toward non-intervention can be diluted further still. A few months ago Donald Trump and Ben Carson claimed to have been against the war in Iraq. Trump, who has taken a lot of positions on a lot of issues, often in the same sentence, has inevitably sounded off about George W. Bush's awful foreign policy. But he has no coherent foreign policy ideas of his own to present for a substantive debate, while Carson in his other pronouncements about foreign policy has shown he hasn't learned any lessons about the Iraq war.

The interventionist vs. non-interventionist or "realist" debate that re-emerged in the Republican party in the last six years even presents itself within individual candidates. Ted Cruz got a lot of press for suggesting he'd "carpet bomb" ISIS. He's also smeared as an "isolationist." The Pentagon, incidentally, says it's running out of bombs to drop on ISIS. Call that what you want.

As more voters start to pay attention to the Republican contest, candidates will either seek to sound like saber-rattlers while staking out an outlook on foreign policy and "national security" no different than Hillary Clinton or try to point out how absurd it is for Republicans to enter the 2016 presidential campaign with a candidate unable to critique Clinton's broader foreign policy failures because they agree with her. At least the Republican side has candidates still trying to do the latter, for now. Democrats are substantively engaging neither Clinton's foreign policy failures nor the real-world consequences of their own foreign policy positions and preferences.