Telling students what to think about the Syrian refugees 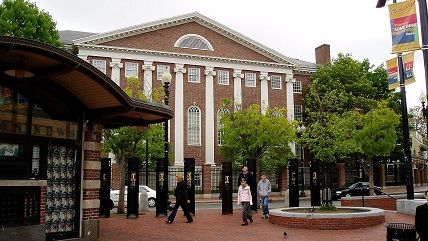 Fearful that students heading home for the holidays will have trouble discussing topical political issues with their families, Harvard University administrators have installed placemats in the cafeteria that tell students what they should say and think.

From The Harvard Crimson:

Dubbed "Holiday Placemat for Social Justice" and described as "a placemat guide for holiday discussions on race and justice with loved ones," the placemats pose hypothetical statements on those topics and offer a "response" to each of those in a question and answer format. For example, under a section entitled "Yale/Student Activism," the placemat poses the question, "Why are Black students complaining? Shouldn't they be happy to be in college?" and suggests that students respond by saying, "When I hear students expressing their experiences on campus I don't hear complaining."

In the center of the placemat are what it calls "tips for talking to families," with recommendations such as "Listen mindfully before formulating a thoughtful response" and "Breathe."

The placemats are the handiwork of the college's Office for Equity, Diversity, and Inclusion and the Freshman Dean's Office, which means they carry the institutional endorsement of Harvard. That fact has some students perturbed:

Aaron I. Henricks '16 said he found the publication of the placemats by an official Harvard office "beyond inappropriate and arrogant," criticizing their one-sided presentation of "highly debateable subjects." The placemats offer a single response to each proposed question.

"I don't think that's the place of any Harvard employee to tell students the right way to think about the Syrian refugee crisis. That's ridiculous to me," Henricks said, referencing a statement on the placemat that reads "Racial justice involves welcoming Syrian refugees."

That's not quite right. Certain Harvard employees can and should offer concrete opinions on the Syrian refugee crisis: the faculty. Harvard classrooms are an ideal place for professors and students to debate complex political issues.

Administrators, on the other hand, should really avoid clumsy attempts to tell students what to think. I agree with the placemats on the subject of Syrian refugees, but what about students who don't? Is there an Office for Alternative Viewpoints at Harvard to circulate right-leaning placemats in dining halls?