Cruz and Rubio rise as they focus on social conservatives. 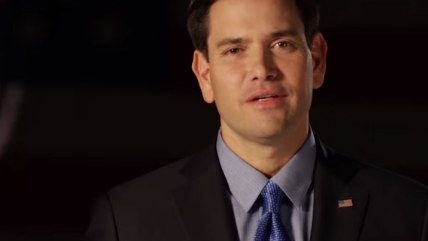 This was supposed to be the presidential election where gay issues stopped mattering. Okay, maybe that was a narrative I made up entirely by myself in my own head out of naïve hopefulness. Yes, the Democratic Party is still trying to keep the majority of gay voters on their side. But the Supreme Court's Obergefell decision—which mandates states recognize same-sex marriages—was an opportunity for the Republican Party to jettison some of its increasingly unpopular positions on how the government should be treating gay people.

It is true that gay and lesbian issues are playing very small roles in the primary debates so far. The more pressing issues of terrorism and foreign policy will most assuredly dominate tonight's debate. But with Donald Trump pretty much overwhelming every GOP candidate's efforts at appealing to right-wing populism and nativism, other candidates are scrambling to shore up their appeals to other primary voter bases.

That means religious conservatives. This push isn't new. Candidates have been meeting with religious groups and churches since the start of the election cycle. But the rise of Trumpism has the candidates most closely nipping at his heels, Sen. Ted Cruz (Texas) and Sen. Marco Rubio (Florida), looking to burnish their religious bonafides and engage in some signaling to voters who aren't enamored of Trump's "whatever sticks" campaign. For some religious conservatives, that means continuing to fight against gay marriage recognition and refusing to accept that, as a legal issue, the matter may be settled.

Cruz was ahead of the pack on pandering to the anti-gay crowd all along. Cruz supports legislation and even a constitutional amendment to undo Obergefell and return the power to control whether gay marriages are recognized back to the states. He's been identified by the National Organization for Marriage (NOM), the most vocal organization fighting gay marriage recognition, as a "marriage champion."

Cruz just recently picked up the endorsement of Bob Vander Plaats, president of conservative group The Family Leader, and noted, extremely vocal foe of gay marriage in Iowa. Given Cruz's increasing numbers in the polls, running for these votes seems to be working for him.

Rubio is looking for his slice of the evangelical or social conservative pie as well. Over the weekend in a Meet the Press interview, Rubio said he didn't think Obergefell settled the matter of gay marriage. Via Bloomberg:

"It is the current law. I don't believe any case law is settled law. Any future Supreme Court can change it," Rubio said on NBC's Meet The Press, referring to the landmark June 2015 ruling. "And ultimately, I will appoint Supreme Court justices that will interpret the Constitution as originally constructed."

On Monday, Rubio rolled out a new campaign ad in which he appeals to Americans who "feel out of place in our own country," including "millions with traditional values branded bigots and haters."

Bloomberg is quick to point out Rubio's position puts him at odds with voters of his own age and younger. True, but these are the primaries. It's also extremely unlikely that Rubio, as president, will be able to select justice that promise to overturn Obergefell, any more that it will be possible for Hillary Clinton, if she's elected president, to demand Supreme Court candidates promise to overturn the Citizens United decision, no matter how many times anybody says "Dred Scott."

This should have been or could have been an opportunity for conservatives to shift to a differentiation between how the government treats gay people as a legal matter and how private individuals treat gay people. As Elizabeth Nolan Brown noted after attending a summit about the future of LGBT activism, there is very little interest among these leaders in discerning between public and private discrimination. Unfortunately, it looks like conservatives aren't willing to recognize the difference either. They want to tie demands for private individual expression of religious beliefs (by being able to decline to provide goods or services for gay weddings, for example) with the public issue of how the government treats same-sex couples.

It's frustrating because this could have been an opportunity for the GOP to look at what comes next and figure out how conservative politics could adapt to a shift in legal recognition while still preserving individual liberty. And Hillary Clinton is actually somewhat vulnerable on this issue. Her absurd, easily disprovable claim that President Bill Clinton signed the Defense of Marriage Act in order to protect gay couples from a constitutional amendment was just declared by The Washington Post to be one of the biggest political lies of 2015.

But the pandering to the absurd idea that somehow the Supreme Court would actually roll back a recognition of a civil liberty will most certainly be used to keep gay votes with the Democratic Party. And I can tell Republicans from personal experience that it is absolutely possible to sell to gay people the idea that florists and bakers (for example) should not have to have their freedom of religious expression curtailed for something as non-essential as wedding goods. But it's impossible to credibly make this argument to gay people when you're also demanding that legal recognition of same-sex marriage should also be rolled back.