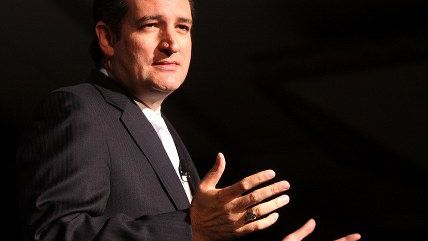 You have to feel sorry for Ted Cruz. Donald Trump has hogged so much airtime with his cynical demagoguery that the senator from Texas has had a hard time capturing the attention of Republican voters. That is surprising, because when it comes to cynical demagoguery, this is the first time Cruz has ever lost out to anyone.

His patented formula is a mix of repellent ingredients: misrepresentation of facts, baseless smears, exaggerated sincerity and pretended solidarity with the average person. If Cruz tells you it's raining, you can leave your umbrella at home.

Most candidates need a full-length speech or a 45-minute town hall meeting to show off all the qualities that should disqualify them. But an interview he did with NPR the other day captured the essence of Cruz in six minutes of nonstop mendacity.

The topic was global warming. Every major scientific body has confirmed its existence, but as "the son of two mathematicians and computer programmers and scientists," he feels particularly qualified to debunk it.

"The scientific evidence doesn't support global warming," he informed NPR. "For the last 18 years, the satellite data—we have satellites that monitor the atmosphere. The satellites that actually measure the temperature showed no significant warming whatsoever."

There are two flaws in his argument. The first is that satellite data are not the only scorecard. Records of surface temperatures, for example, show that "warming during the first 15 years of the 21st century is at least as great as the last half of the 20th century," according to a study by scientists at the National Oceanic and Atmospheric Administration.

The second is that the satellite data don't refute global warming. NASA says that based on surface temperatures, 2014 was the warmest year on record. Based on satellite data, it was the third-warmest.

The same data indicate that of the 14 hottest years ever, 13 occurred in this century. When Cruz says there has been "no significant warming" since 1997, he's engaging in brazen deception.

That's his usual way. Confronted with an overwhelming scientific consensus that human activities are heating up the Earth, he charged that "a number of scientists receiving large government grants" are happy to "disregard the science and data and instead push political ideology." Without naming names or furnishing evidence, Cruz accused climate experts of being thoroughly corrupted by money.

It's a nervy charge coming from him. His super PAC got a whopping $15 million last summer from two oil and gas billionaires. Since his 2012 Senate race, his biggest corporate supporters have been from the petroleum industry.

"I would not be in the United States Senate if it were not for the Club for Growth," he has admitted. Among its other causes, the Club for Growth has opposed action against fossil fuel emissions. Which scenario is more plausible, thousands of scientists pretending to believe in global warming to get government grants or Cruz denying it to get campaign donations?

He says climate change is a ruse by "liberal politicians who want government power over the economy, the energy sector and every aspect of our lives." In his view, any acknowledgment of the alleged problem would lead to a massive expansion of federal control.

What he omits is that the best way to curtail greenhouse gas emissions is a carbon tax. This option has one great advantage, as Gregory Mankiw, who was chairman of the Council of Economic Advisers under President George W. Bush, has noted.

"You don't need all the regulations; you don't need what economists refer to as control solutions," he says. "You let the market work it out." A carbon tax, in fact, would make it easier to dismantle environmental regulations Cruz detests by making them redundant.

He insists that if action is taken to limit greenhouse gas emissions, ordinary people will suffer. "I'm trying to keep power with the single mom waiting tables not to drive up her energy bills," he asserted.

Note his patronizing premise: Waitresses don't care about a healthy planet. Even if that were true, a carbon tax could be offset with tax cuts elsewhere—say, in payroll taxes, boosting the take-home pay of that single mom.

The NPR interview was typical of a presidential campaign that amounts to a traveling circus of fraud. Cruz accuses his opponents of deceiving the public to get money, grab power and advance a dangerous ideological agenda. Look who's talking.