Why Are These ISIS Fighters Kicking Each Other in the Groin? 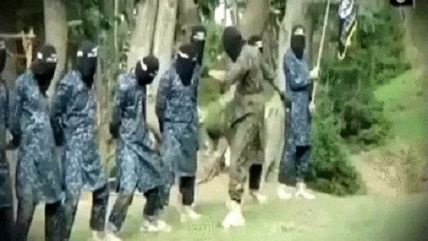 An unusual video released last week purports to show ISIS jihadis going through some rigorous, if perhaps unconventional, boot-camp training. For example, among the activities highlighted in the group's endurance regime are shorter jihadis leapfrogging over taller jihadis, an activity more likely to evoke summer camp than boot camp. Certainly the most striking spectacle in the video is footage of some trainer-looking jihadi facing recruits who are lined up platoon-style, and kicking them rather forcefully in the groin.

This is not the first look at ISIS' often original preparations for battle. Britain's Independent, in its brief report on the footage, noted in an almost rueful tone that, "Absent from the video are the burning hoops ISIS fighters have leapt through in previous videos." Who would have expected that laying the groundwork for Apocalypse itself would so resemble a circus rehearsal?

What is the explanation for such hoop-jumping, leapfrogging, and groin-kicking on ISIS' part? Analysis suggests several possibilities: