How to Talk to Your Republican Turkey About Obamacare

Fear and loathing on Thanksgiving, explained 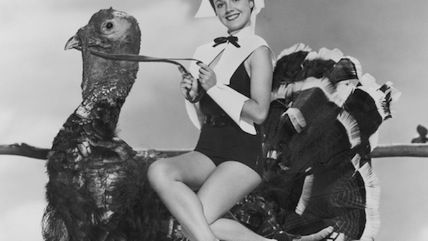 We were somewhere around the main course when the drugs began to take hold. The turkey had grown back its head, and it was calling for the repeal of Obamacare. Vox didn't prepare me for this.

Panicking, I launched into an explainer of the refugee situation. "That's not what we're talking about," the smoked poultry gobbled. Playing for time, I took a bite of turkey, then blanched as the bird began to scream.

"WHERE'S YOUR OBAMACARE NOW?" my meal shouted, every syllable loaded with agony. With a fistful of napkins I tried to stanch the flow of gravy; my relatives' grumbles turned to shouts as I stuffed their servings back into the bird. In the corner of my eye, I could see my father talking on the phone. Was he trying to call Obamacare? No, it was the police: Two burly officers showed up at the door and started moving toward me cautiously. "I need to consult my attorney," I said, picking up a roll. Then I bit it. It started screaming too.

The turkey kept hurling abuse as the cops dragged me away. Just as the policemen were pushing me into the back of the car, I thought I heard one of them suggest a link between vaccines and autism. Oh good, I thought to myself: I remember this one. "Actually, studies have firmly rejected—" I began, as the driver's face started melting away.