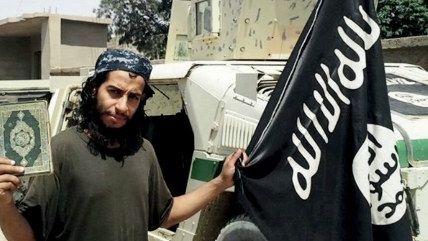 After a bloody series of terrorist attacks, the natural impulse is to respond with overwhelming force to make sure they never happen again. The 9/11 carnage prompted a U.S. invasion of Afghanistan to smash al Qaida, which carried out the attacks, and remove the Taliban, which furnished the plotters a safe refuge.

The Paris attacks have spurred new calls for a change in U.S. strategy toward the Islamic State, also known as ISIS and ISIL, which occupies large sections of Iraq and Syria. But this is not a new American war; it's one we have been pursuing since August 2014. And the group's newly demonstrated ability to slaughter people well beyond the Middle East does not mean the options for fighting it have improved.

The two main ideas coming from presidential candidates are a no-fly zone, championed by Hillary Clinton and others, and a ground invasion, proposed by Jeb Bush and some of his GOP rivals. Neither was a good idea before Paris, and neither has improved with time.

It's easy to forget that a no-fly zone would have little effect on the Islamic State, which has no air force. If anything, it would help the group. This step would affect only the Syrian government and its Russian ally in their fight against insurgents—which include the Islamic State.

If our primary goal is to topple Syrian President Bashar Assad, a no-fly zone has a certain logic. But if the highest priority is crippling the Islamic State, it would be self-defeating. It would also create the risk of shooting down a Russian military jet, sparking a showdown with a nuclear superpower.

Toppling Assad would carry grave hazards. In 2013, then-Joint Chiefs of Staff Chairman Martin Dempsey warned, "Should the regime's institutions collapse in the absence of a viable opposition, we could inadvertently empower extremists"—notably the Islamic State.

A ground invasion would pose dangers that should be familiar by now. Among them: a huge escalation from our initial commitment, as happened in Afghanistan, where the U.S. troop presence ballooned from 5,200 in 2002 to 30,000 in 2008 to 100,000 in 2010. Getting into a ground war is a lot easier than winning one. U.S. troops can do more to inflame than to suppress enmity.

The fantasy common among those seeking the White House is total victory. Bush vowed to build a coalition "to take out ISIS with overwhelming force." Clinton said her mission "is not to deter or contain ISIS but to defeat and destroy ISIS." Marco Rubio said, "When I am president, what I will do to defeat ISIL is very simple: whatever it takes."

They imagine we can vanquish it as we did imperial Japan. But the Islamic State is not an established, unified nation-state. It's a diffuse entity that can migrate across borders and generate followers and affiliated groups in other places—as it has done already in Egypt and Libya.

No country has more experience fighting vicious terrorists than Israel, which has learned that chasing total victory is like trying to drink the ocean dry. In 2006, it invaded Lebanon to go after Hezbollah, which was firing rockets into Israel. The stated goal was to "remove this threat once and for all."

It didn't succeed. The outcome was a draw that only diminished the threat for a while. A few months ago, The New York Times reported that Israel was preparing "for what it sees as an almost inevitable next battle with Hezbollah." Israel has had similar experiences against Hamas, invading Gaza three times in the past seven years but choosing not to attempt to dislodge the radical group from power.

If Israel is unable or unwilling to eliminate such potent enemies on its borders, the U.S. is not likely to be able to obliterate the Islamic State. The better option is to use air power and other means to persistently punish, harass, disrupt and contain the group, ensuring it can't plan terrorism unimpeded. We might even want to look for ways to work with Russia and Iran. Over time, we can hope to curtail the danger.

The Islamic State presents the sort of vexing challenge once referred to by the former Israeli Prime Minister Shimon Peres. "If a problem has no solution," he said, "it may not be a problem but a fact—not to be solved but to be coped with over time." Sometimes the key to enhancing security is knowing what not to do.