How the New York Times Botched its Exposé of Nail Salons

The Times mistranslated and misconstrued evidence, leading to statewide regulations on the nail salon industry. 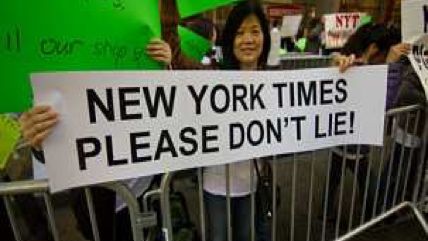 In May 2015, The New York Times published a much-discussed two-part story claiming, among other things, that nail salon workers in New York State are routinely exploited—earning wages as low as $10 per day.

Immediately after the first article appeared, New York State Governor Andrew Cuomo (D) started a regulatory crackdown on nail salons. The result has been to wreak havoc on this immigrant-dominated industry and to close off employment opportunities for undocumented workers.

And the New York Times story that inspired Cuomo's crackdown broadly mischaracterized the nail salon industry. Manicurists are skilled employees whose labor is in high demand, and they have a good deal of bargaining power. Some of the men and women the Times reporter spoke with say she misquoted them or misrepresented their businesses.

Read the first of three articles dissecting the Times' coverage of nail salons and its consequences for the industry: https://reason.com/blog/2015/10/27/ne…

Read the article by New York Times Public Editor Margaret Sullivan that came out in response to Bernstein's and Reason's reporting: http://publiceditor.blogs.nytimes.com…